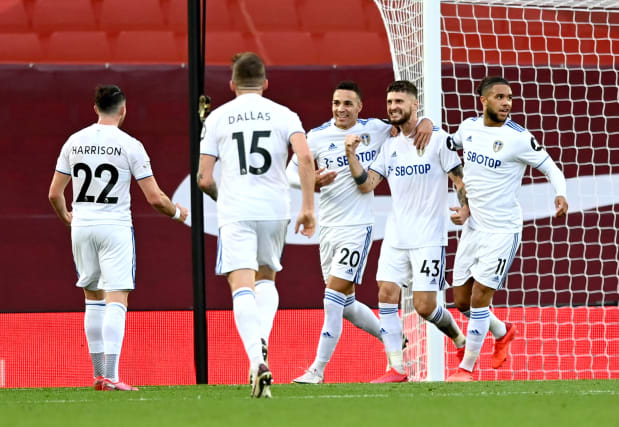 Liverpool began the defence of their Premier League title with an unexpected thriller against newcomers Leeds as the 2020-21 season got under way just 48 days after the last campaign ended.

Arsenal won despite a pre-match bust-up between two of their own players, while Everton laid down a marker to finally gatecrash the top six.

Here, the PA news agency looks at some of the talking points from this weekend’s action.

Leeds are not just here to take part

There would have been no blame attached to Marcelo Bielsa if he decided to ‘park the bus’ upon discovering Leeds’ first top-flight fixture in 16 long years would be the indomitable champions. But the Argentinian is cut from a different cloth and has no time for reputations. Such an outlook helped Leeds go toe-to-toe with a superior opponent, equalising three times before Mohamed Salah’s hat-trick-sealing 87th-minute penalty averted a surprise result. A 4-3 defeat to the Reds is no shame and if Leeds can bottle this gutsy formula then they will cause a few bloody noses over the coming months.

Stan Kroenke’s ownership has in the past been labelled as “passive” by Arsenal fans, and it was a similar story on the pitch under Unai Emery and even in the last couple of years of Arsene Wenger’s rule. It has not been plain sailing for Mikel Arteta either but it slowly seems to be coming together. A 3-0 win at Fulham – with new signings Gabriel and Willian impressing – came after Dani Ceballos and Eddie Nketiah had a bust-up beforehand. Arteta called for “passion, aggression” when he first took charge at the start of the year and it seems that is what the Spaniard is getting.

Shoots of encouragement for Newcastle

Hope has been in desperately short supply for Newcastle under Mike Ashley’s ownership. It seemed his tenure was drawing to a close but despite a proposed takeover collapsing and the recriminations continuing, Ashley has, to the surprise of many, given the green light to several transfers. The signings of Callum Wilson, Jeff Hendrick, Jamal Lewis and Ryan Fraser seem shrewd bits of business and the first two made an ideal start to life with the Magpies. Wilson toe-poked Newcastle ahead at West Ham while Hendrick made sure of a 2-0 win late on. One swallow does not make a summer, but it is a start.

Is this finally the year for Everton?

There have been many false dawns for Everton as they sought to break the top-six dominance of recent campaigns. On some occasions they have come up just short but last season they got nowhere close. However, in Carlo Ancelotti they have a top-quality manager who can lead them to the promised land, so it is unsurprising he has been bankrolled. The Italian’s pull has persuaded James Rodriguez and Allan, players he has previously worked with, into a reunion and the pair impressed as Jose Mourinho’s Tottenham were beaten 1-0.

Evergreen Vardy remains a fox in the box

Jamie Vardy scored 23 times last season to win the Golden Boot and his two goals – both penalties – in a 3-0 win at newly-promoted West Brom took him to 105 top-flight goals, one above former Chelsea striker Didier Drogba in the all-time scoring charts. He turns 34 in January but boss Brendan Rodgers knows Vardy remains one of the best. “There are many top strikers at this level but any team would want someone like him in there,” Rodgers said. “He’s super cool, clinical and has still got pace and running ability. It’s a great start for him to score two goals and very good for the team.”