Roy Hodgson hopeful of hanging on to match-winner Wilfried Zaha 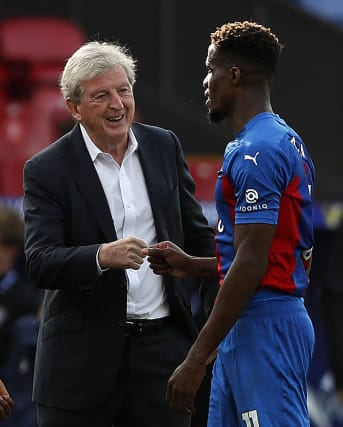 Roy Hodgson is hopeful Crystal Palace will keep hold of Wilfried Zaha after he earned an opening-day Premier League victory against Southampton.

Zaha, who played more centrally in a 4-4-2 alongside Jordan Ayew, got off the mark in the 13th minute at Selhurst Park when he volleyed home from Andros Townsend’s cross.

He could have had a second late in the 1-0 win but was adjudged to be offside and yet Palace held on for the points in the capital.

Despite a number of clubs registering an interest in the winger over the last 12 months, Zaha remains at his boyhood side and Hodgson would like it to stay that way.

“We hope so,” the Palace manager replied when asked if the Ivory Coast international will be at the club after the transfer window shuts on October 5.

“The fact is every transfer window I have been involved in, Wilf has made noises he would like to play for a club that can offer him Champions League football and a step up in his career after he has given us so much good service.

“But for anything to happen, that club needs to come in and pay the asking price and until that time happens, I am very happy to keep working with Wilf.”

Palace were indebted to goalkeeper Vicente Guaita in the second half, who made a superb point-blank stop to deny Che Adams before he parried away Danny Ings’ late header.

It ensured the Eagles, despite having seven players out injured and five of them defenders, were able to secure a first clean sheet of the season on the third anniversary of Hodgson’s appointment.

The 73-year-old added: “It was always going to be a tough opening fixture for us, but I am really pleased with how we approached it.

“I have to take my hat off to our goalkeeper for making a fantastic save from Danny Ings, but I am very happy to get off to a good start against a team like Southampton with such good quality.”

While Saints had their opportunities, boss Ralph Hasenhuttl admitted they needed to do more in south London.

He said: “When you don’t score, you don’t deserve anything. We had some chances yes, but the goalkeeper made a few saves.”

The Austrian was impressed with referee Jonathan Moss, who used the pitchside monitor to downgrade his decision to send off Kyle Walker-Peters.

Southampton’s full-back had caught Palace defender Tyrick Mitchell with a high boot in the 49th minute, but after the man in the middle had taken a second look, he pulled out a yellow card to overturn his initial red.

Hasenhuttl added: “The first good thing was the speeding up and it is good to use more often the screen.

Palace head to Bournemouth next in the Carabao Cup on Tuesday, while the Saints host Brentford in the second round on Wednesday.

One player who could again be missing for Southampton is attacker Sofiane Boufal, who was not part of the matchday 18 for the league opener.

Hasenhuttl admitted: “We have a few guys who can still move and maybe he is one yes.”