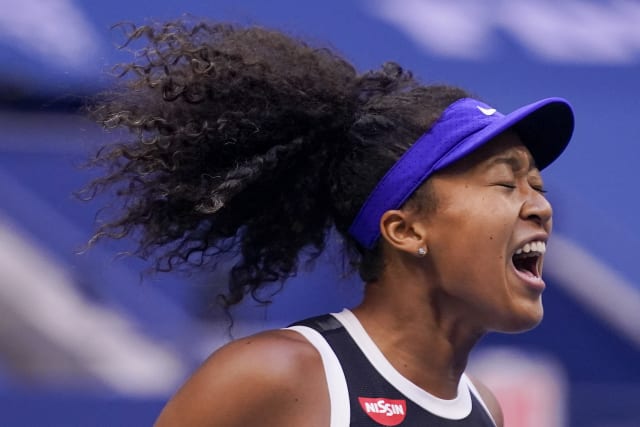 Naomi Osaka staged a brilliant comeback to defeat Victoria Azarenka and win her third grand slam title at the US Open.

Azarenka picked up where she left off in her semi-final victory over Serena Williams and swept through the first set in just 27 minutes.

She was 2-0 up in the second set as well and almost within sight of the finish line only for Osaka to dig in, wrestle the match onto her terms and march to a 1-6 6-3 6-3 victory.

The 22-year-old Japanese star, already the highest-earning female athlete in the world, adds another £2.3million in prize money to her fortune while she becomes the first Asian player to win three grand slam titles, surpassing Chinese trailblazer Li Na.

Osaka’s first slam title here two years ago felt like something of a sideshow to the now infamous row between Serena Williams and umpire Carlos Ramos.

She won a second successive title at the Australian Open last year and became the world’s best player but Osaka, a shy and quirky character, has admitted that she was not ready to be in such a position.

There have been plenty of low moments since but Osaka now seems ready to embrace her status and the platform it brings.

She has been a vocal advocate for Black Lives Matter, inspiring a pause in play at the Western & Southern Open and wearing facemasks during this tournament bearing the names of black victims of brutality and violence.

Tamir Rice, a 12-year-old boy killed by a policeman while playing with a toy gun in 2014, was the name she kept for the final while Osaka’s boyfriend, rapper Cordae, sat in the stands with a T-shirt bearing the words ‘Defund the police’.

Playing for a cause greater than herself certainly seems to have helped Osaka find perspective on the court, although she was surely anything but calm internally as Azarenka bullied her around the court in the first set.

Azarenka’s resurgence has been the most compelling story of the tournament, the 31-year-old putting behind her three years of struggles on and off the court to reach her first slam final for seven years.

She had a point to lead 3-0 in the second but could not take it and from there the match changed. Osaka broke serve and slowly began to take charge, imposing her power game on her opponent.

She won four games in a row to clinch the second set and lost just one of the next five, clawing her way back from 0-40 to hold for 4-1.

With that Azarenka’s chance seemed to have gone but she forged a reputation as one of the sport’s most stubborn competitors at her peak and she simply refused to let Osaka break again for 5-1.

Suddenly the fourth seed wobbled and they were back on serve but, while Azarenka’s heart remained determined, her legs were clearly feeling the pace and the night belonged to Osaka.