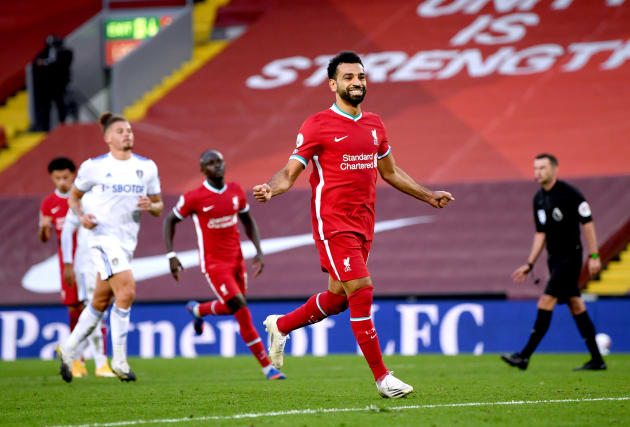 Mohamed Salah’s hat-trick helped Liverpool claim a thrilling 4-3 victory over newly-promoted Leeds, as the Premier League champions were given an early indication of just how difficult the defence of their title will be.

Leeds had waited 16 years for this moment and it was well worth the time served as they showed, just like when they were last in the top flight, they are no respecters of reputations, with Mateusz Klich’s brilliant 66th-minute effort for their third equaliser an indicator of the quality they possess.

However, when Salah completed his treble with an 87th-minute penalty – his second spot-kick of the game – dreams of an Anfield upset were dashed as Jurgen Klopp’s men pulled a dramatic late win out of the bag again.

The game had some of the thrills and a lot of the spills you expect from a season-opener: more Salah magic, a rare mistake from Virgil Van Dijk, a Premier League debut strike for Jack Harrison, goals aplenty, just as many disallowed.

And that was just the first 45 chaotic minutes.

If Klopp’s team are going to be this careless this season then the trophy they waited 30 years to get their hands on will very quickly slip through their grasp.

Allowances have to be made for the circumstances under which this campaign began, with a shorter pre-season, still no crowds in grounds and preceded by an international break.

But neither Klopp nor Leeds counterpart Marcelo Bielsa would have been particularly happy with what they saw in a crazy first half, in which the only surprise was that not more than five goals were scored.

It was not even as if the attacks were on top – Leeds netted from their only three shots on target – and more a case of defences being carefree to the point of being negligent.

But through the fog of that chaos there were moments of quality and familiarity.

Salah became only the second player to score in the opening round of a Premier League season for the fourth successive time, matching Teddy Sheringham’s 1996 achievement, and while his first was a fifth-minute penalty, won after his shot hit the arm of Robin Koch, his second was a crisply struck half-volley when Leeds failed to clear a free-kick.

His strikes bookended a 29-minute spell in which the Premier League newcomers twice equalised with on-loan Manchester City midfielder Harrison’s goal a great individual effort, turning England internationals Trent Alexander-Arnold and Joe Gomez inside out before beating Alisson Becker down to his right.

Patrick Bamford’s chip over the Brazil international after uncharacteristic hesitation and miscontrol by Van Dijk made it 2-2, cancelling out the Holland captain’s powerful header which Leeds goalkeeper Illan Meslier could not prevent crossing the line.

Both sides also had goals ruled out for offside, with Sadio Mane’s perfectly-executed lob over an out-of-position Meslier – who was also forced to tip over at full-stretch from team-mate Pascal Struijk’s deflection – particularly unlucky to be flagged for Andy Robertson transgressing as he closed down the Leeds defence.

While Leeds’ backline, despite their own title win last season, may have been expected to concede at Anfield where Liverpool have not lost a league match since April 2017, the host’s leaky rearguard was somewhat unexpected.

Klopp’s decision to leave out defensive midfield linchpin Fabinho in order to field a central three of Jordan Henderson, Georginio Wijnaldum and Naby Keita undoubtedly contributed to that frailty.

Fabinho was eventually introduced just before the hour, moments after another bizarre moment typical of this game when Alexander-Arnold headed into his own net only for him to be saved by an offside flag against Harrison.

Bielsa responded by sending on club-record signing Rodrigo, a £26million capture from Valencia, but it was the combination of Helder Costa and Klich which brilliantly restored parity, the Pole controlling a low cross with his first touch and dispatching the ball inside the far post with his second.

Still the twists and turns came, with Van Dijk blasting home from close range only for the goal to be disallowed after referee Michael Oliver blew for the softest of fouls by substitute Curtis Jones.

But when Rodrigo fouled Fabinho late on there were no more mistakes as Salah clinically secured a thrilling victory.