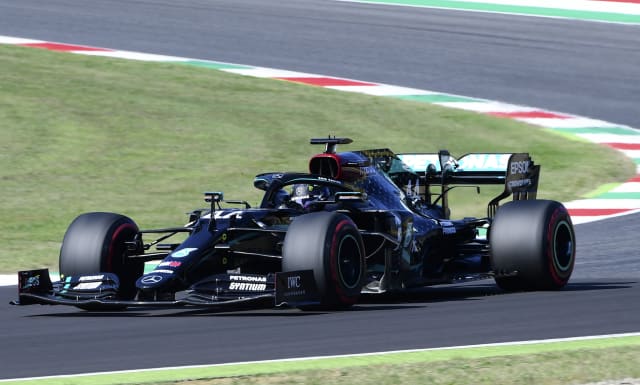 Lewis Hamilton powered to the 95th pole position of his career at the Tuscan Grand Prix.

The six-time world champion headed into Saturday’s qualifying session having failed to top any of the three practice sessions staged at Mugello.

But, as he so often does, Hamilton saved his best for the crunch, edging out Valtteri Bottas by just 0.059 seconds as Mercedes secured another front-row lockout.

Max Verstappen was unable to take the challenge to Mercedes – the Dutchman finishing third, 0.365 sec behind Hamilton – with his Red Bull team-mate Alexander Albon fourth.

The ninth round of 17 might be taking place in an unusual setting here at Ferrari’s fast-sweeping test track tucked away in Tuscany, 25 miles outside of Florence, but there was a sense of familiarity at the top.

Mercedes have now been on pole at every round this year with a car that is comfortably the class of the field.

And while there is a sense of unpredictability, with Sunday’s race the first to be staged at Mugello, Hamilton will start as the favourite to extend his 47-point championship lead over Bottas by winning for the 90th time, and moving to within just one of Michael Schumacher’s all-time victory record.

Hamilton savoured his pole, saying: “I have been working so hard in the background to improve my lines. Finally I got the lap that I needed.

“This track is phenomenal. It is a really challenging circuit. The G-force we are pulling is insane.”

The spotlight is on Ferrari at their landmark race and chairman Louis Camilleri, watching on from the back of the garage, was spared the indignity of seeing his four-time world championship-winning driver fall at the first hurdle. Vettel snuck into Q2 by just five hundredths of a second before finishing 14th.

The German is off to race for Aston Martin next year and both driver and team will want to hurry through his remaining nine appearances as a Ferrari driver.

Camilleri will be among a host of Ferrari stars, past and present, to be involved in a public show celebrating the Italian team’s F1 achievements in Florence’s Piazza della Signoria on Saturday night.

But the team does so in the midst of its worst crisis in a generation. They head into Sunday’s race sixth in the constructors’ standings, a staggering 220 points behind Mercedes.

Although Leclerc fared much better than Vettel – he will start fifth – it will do little to improve the mood at the sport’s most decorated team. The Monegasque driver was 1.1 sec slower than Hamilton.

The Williams driver has started every grand prix ahead of his team-mate, and here, he will line up in 18th, one slot higher than Nicholas Latifi in the sister car.

Pierre Gasly was the surprise winner at last weekend’s Italian Grand Prix but the Frenchman was brought back down to earth here after he was knocked out in Q1. He finished 16th.