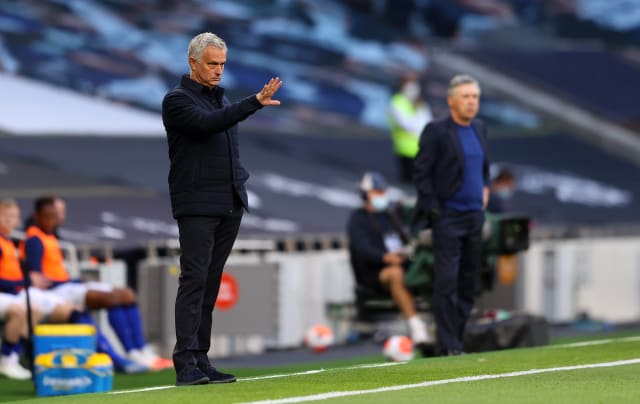 Tottenham boss Jose Mourinho does not want to think too much about his side’s gruelling schedule over the next month.

Sunday’s Premier League opener against Everton is their first of a possible nine in 22 days as Spurs pay the price of having to enter Europa League qualification.

The quickfire rounds of the Carabao Cup also hurt them as they will have two weeks where they have to play Tuesday, Thursday, Tuesday if they progress in all competitions.

It is a full-on calendar and will require Mourinho to use the full depths of his squad and possibly some of his youth team too.

“I want to go to every match positive. But the other day I made a challenge with my boys, asking them which one of them thinks they can play all these nine matches for 90 minutes and nobody told me ‘I can’.

“So we all are very, very aware that it is impossible to do it. It is not human.

“It is a big risk in terms of our ambitions, first of all, because it is very, very possible you lose one of these matches and the part of the Premier League where you can lose and stay in competition but if you lose in the Europa League, you go out.

“If you lose in the Carabao Cup, you go out too.

“So looking at that level, it is a big risk. Injury, obviously, if everybody speaks about lots of matches in some periods, this is something unique. It has never happened, never happened.”

Mourinho does not have the luxury of being at a club that can afford to prioritise one competition over another as the clamour for him to bring silverware to Tottenham will intensify this season.

“We have our rights to try and fight for the competitions.

“We end by asking, ‘Which professionals? Who are the people? Who are the illuminated that make these decisions?’

“Because this is not about Tottenham. This is about an English club. It was Tottenham but it could be Wolves, it could be Sheffield United.