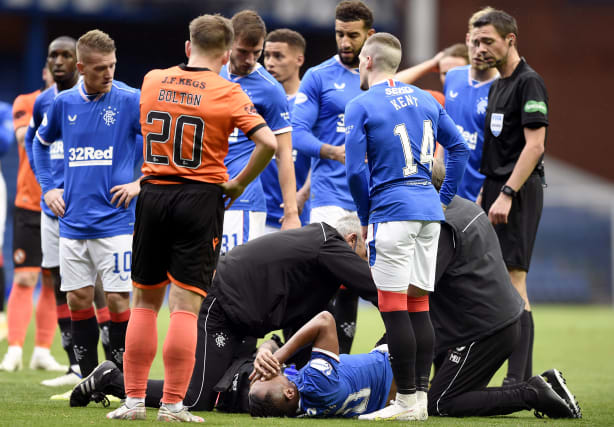 Rangers tightened their grip on top spot in the Scottish Premiership but their 4-0 win over Dundee United at Ibrox came at a painful price.

Brandon Barker and Ryan Jack both limped off in the first half for Steven Gerrard’s men while substitute Alfredo Morelos had to be stretchered off after a bad challenge from Ryan Edwards.

The injuries took the gloss off a comfortable win for the hosts, with Ryan Kent producing a display of nifty footwork before dispatching the opener past visiting keeper Benjamin Siegrist in the 13th minute.

Rivals Celtic won 5-0 at Ross County but the final result was a little unfair on the hosts who struck the woodwork twice and forced a string of fine saves from keeper Vasilis Barkas.

Odsonne Edouard put the visitors in front from the penalty spot after just five minutes, before Iain Vigurs hit the post for Ross and Barkas saved brilliantly to deny Ross Stewart an equaliser.

Hibernian maintained their fine start to the season with a 3-0 win at St Mirren, who solved their goalkeeping crisis three hours before kick-off by bringing in emergency signing Zdenek Zlamal from Hearts.

The hosts had seen three keepers withdrawn due to coronavirus-related issues, but Zlamal was helpless to prevent a Hibs win which came through two quickfire goals from Kevin Nisbet and Joe Newell, and a third from Martin Boyle on the hour mark.

Ross McCrorie scored his first goal for Aberdeen as Derek McInnes’ men also kept up their promising start with a 1-0 win over Kilmarnock at Pittodrie.

Scott Wright sparked the 16th minute move by bursting down the left flank and his ball into the box found McCrorie who summoned a brilliant first-time finish for the only goal of the game.

Eighteen year old Kyle Munro headed a dramatic winner as Hamilton lifted themselves off the foot of the table with a come-from-behind 2-1 win at Livingston.

Scott Pittman fired the hosts in front with less than a minute on the clock but David Templeton equalised on 57 before turning provider with the late free-kick with which Munro connected.

Allan Campbell’s 25-yard drive in the fourth minute proved enough for Motherwell to edge to a 1-0 win over St Johnstone at Fir Park.