Valtteri Bottas has the edge on Lewis Hamilton in Mugello practice 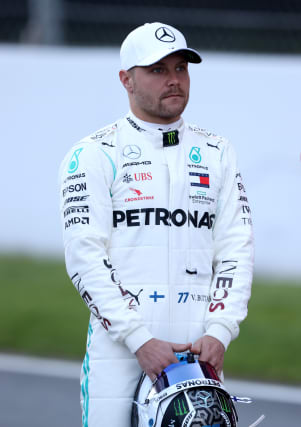 On Formula One’s inaugural visit to Mugello for a grand prix, Mercedes took control of the weekend with Bottas fastest in both sessions.

The Finn, who trails Hamilton by 47 points in the standings, saw off Red Bull’s Max Verstappen in the first action before beating Hamilton by 0.207 seconds later in the day.

Ferrari, who celebrate their 1,000th grand prix here, might have been encouraged by Charles Leclerc finishing third in the opening session.

But Leclerc dropped to 10th in the next running, 1.4 sec behind Bottas, with Sebastian Vettel 12th in the sister Ferrari.

The four-time world champion was then forced to park his car at the penultimate corner in the closing moments with an apparent technical issue.

Vettel and team-mate Leclerc may be racing in a one-off burgundy livery this weekend to celebrate Ferrari’s landmark race but the Italian team’s poor form – which has seen them drop to sixth in the constructors’ standings – looks set to carry over into another weekend.

The first of two red-flag periods arrived when Norris was involved in the opening major incident of the weekend.

The 20-year-old caught the gravel on the exit of the right-handed third bend, sending him out of control and into the wall. He sustained significant damage to the front of his McLaren but was unharmed in the high-speed crash.

Norris, who finished fourth at the Italian Grand Prix last weekend, returned to the pits on the back of the scooter as the action was stopped to deal with the Briton’s wounded car.

The running was then suspended for a second time as Sergio Perez, who this week discovered he will be replaced by Vettel in 2021, hit Raikkonen.

Perez was exiting the pit lane but clumsily locked his front-right tyre under braking and tagged Raikkonen’s Alfa Romeo.

The force of the impact sent Raikkonen spinning into the gravel. The Finn gesticulated with his right hand as Perez limped back to the Racing Point garage after damaging his car. The unusual incident is under investigation with Perez summoned to the stewards.

The ninth round of 17 might be taking place in an unusual setting, 25 miles outside of Florence, but there was a sense of familiarity at the top with the Mercedes cars leading Verstappen – the Dutchman 0.246 sec slower than Bottas.

His  Red Bull team-mate Alexander Albon finished fourth ahead of the Renault duo of Daniel Ricciardo and Esteban Ocon. Norris was 14th before he crashed with fellow Briton George Russell 16th for Williams.