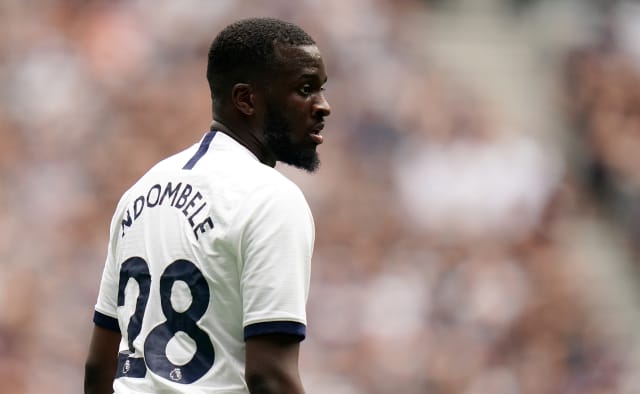 Jose Mourinho has given good indication that Tanguy Ndombele can turn his Tottenham career around by saying the record signing is “working better than ever”.

The Frenchman, who cost Spurs £55million from Lyon last season, flopped in a torrid first year in English football, suffering injury and fitness issues, and has been linked with a move away this summer.

Ndombele fell foul of Mourinho, who publicly criticised him on two occasions, and gave him just 64 minutes of action in the final nine games of the season after the restart.

But Spurs are keen to give him time to establish himself at the club and Mourinho says he is showing a good attitude.

He missed the start of pre-season but made his first appearance in last week’s friendly at Watford and has spent the whole week training at Hotspur Way.

Mourinho said: “He’s working very hard. I have to be honest and say he is working better than ever. Of course he finished the season injured with a very important injury.

“He came back after holidays and of course he was still injured, in spite of doing some work on the recovery process.

“He didn’t start the pre-season with us. When you saw him 45 minutes against Watford it was easy to understand and say he’s not in the best condition. But he trained only two days before that match.

“This week he did not go to the national team and trained every day. Is his condition better today than it was last week? Yes his condition is better. And he is working very, very hard.

“So the point now is – can he keep that commitment and desire? If he does it, he has incredible potential.”

Ndombele is seen having showdown talks with chairman Daniel Levy at the back end of last season in the latest batch of episodes of Amazon Prime Video’s All or Nothing series.

Asked by the chairman what went wrong in his first year at the club, Ndombele replied: “For three months I trained hard. Everybody says I trained really well, but if I don’t play it means there must be something else.

“I’m a fighter. I’ve always fought. I’m here today because I fought. I have never given up in football or in life.”

Levy, who is desperate for his large investment in Ndombele to pay off, is seen to be sympathetic to the Frenchman and knows he needs time.

Speaking via player liaison officer Roberto Balbontin, the chairman said: “Many players in their first season, coming from overseas, found it difficult. It is normal. Moussa (Sissoko), obviously he knows him well, he came to Tottenham and was very disappointing in the early period.

“I said to him, ‘Look I know you’re a better player than you are showing, but you have to decide what’s in your head’. The nice thing about Moussa is that he’s an absolute fighter. He was not prepared to leave the club.

“We the club and the manager, we both believe he has the talent. He has to unlock it. Only he can turn this around.”

Meanwhile, Mourinho has said he does not want to sell Serge Aurier.

It was widely expected that the signing of Matt Doherty from Wolves signalled the end of Aurier’s time in north London, and he has been linked with a move to Italy.

“When we bought Matt it was not to sell Serge,” the boss said. “When we got Matt it was to strengthen the squad and to have more options.

“And not to be in a very difficult situation like last season where Serge was playing all the time.

“But the reason why we got Doherty was to improve the squad and not to sell Serge. If you ask me directly do you want to sell? No I don’t.”