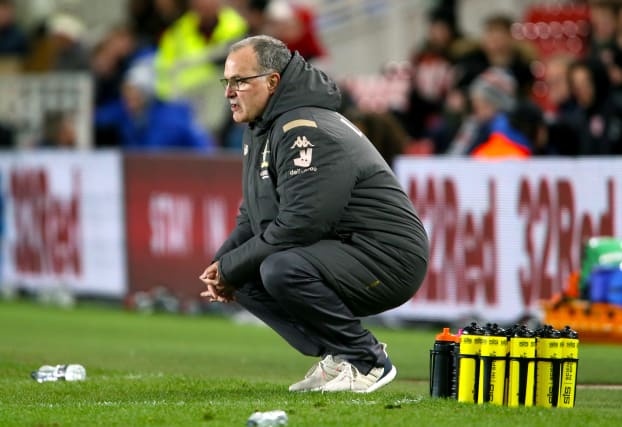 Marcelo Bielsa has refused to speculate about how he thinks Leeds will fare in their first season back in the Premier League.

Leeds face a baptism of fire on Saturday when they launch their long-awaited top-flight return at champions Liverpool.

Bielsa, who will remain at Elland Road for a third season after Leeds announced on Friday morning he had finally signed his new deal, has also declined to set his side any targets.

“I don’t like to predict so far into the future because I don’t know what is going to happen,” said the Argentinian.

“It’s very difficult to anticipate and predict what’s going to happen when there is a change in league and change in quality.”

Bielsa confirmed in his first media gathering as a Premier League head coach on Thursday that he would be staying for at least another season after guiding the club to their convincing Sky Bet Championship title triumph.

The 65-year-old, notoriously fastidious, played down any concerns over the delay.

The PA news agency understands his complex arrangement with the club to pay his backroom staff out of his own salary, reported to be more than £6million, had made for protracted negotiations.

Speaking via a new translator before Saturday’s trip to Anfield, Bielsa kept his answers short and to the point.

He said his side will approach their opening games in the top flight with the same high-tempo, all-out offensive style they employed in the Championship.

“It’s one of the difficulties we will face this season and we have to show we can continue to play the way we want,” he said.

Club record signing Rodrigo and Germany defender Robin Koch are both in contention for their debuts and apart from Adam Forshaw, working his way back from a long-term hip injury, Bielsa will select from a full-strength squad.

On the daunting opening-day challenge at Liverpool, Bielsa said: “They are the champions, with a consistent style of play. Without a doubt they are one of the best teams in the world.

“It’s the best league in the world and it always requires you to be at the highest level.”

“Any words that I add would just be repeating the praise he has already rightly received.”

Bielsa, who said he had not taken a holiday since the club’s promotion celebrations, was asked if he was a fan of Klopp’s “heavy metal” brand of football.

“I have not got much culture in music so I wouldn’t know,” he replied.