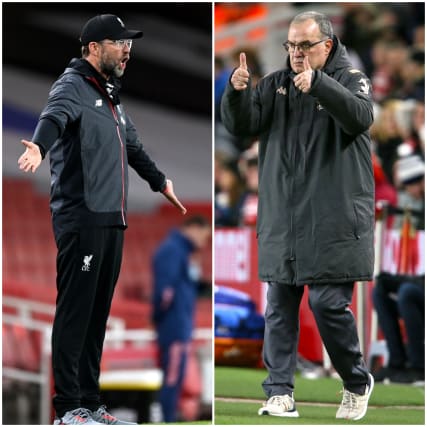 Jurgen Klopp comes up against Marcelo Bielsa in an intriguing battle of managers as champions Liverpool host promoted Leeds in their Premier League opener on Saturday.

Here, the PA news agency profiles the men in charge.

Both managers are renowned for their high-intensity playing styles, which focus on pressing the opposition and quickly moving the ball forward. Klopp has varied his approach slightly over his five years in the Premier League to conserve energy more, but his team still press high up the pitch with the forwards rarely easing up. Leeds are also quickly onto opponents when out of possession and direct and dynamic when they have the ball.

Bielsa, 65, is a hugely admired and vastly-experienced coach. Hailing from Rosario in Argentina, Bielsa quit playing to begin coaching 40 years ago. He is known for his meticulous attention to detail and his intensity, with his nickname of ‘El Loco’ giving an indication of his character. There have been many fall-outs along the way – notably resigning at Lazio after just two days in charge – but he has otherwise left his mark in a career that has seen him lead the Argentina and Chile national teams as well as clubs in South America, Spain and France. Often choosing to sit on an upturned bucket, he is an interesting watch on the sidelines. Klopp, 53, is a bundle of energy in the technical area. The German has also shone in management after a modest playing career, previously leading Mainz and Dortmund before moving to Liverpool in 2015.

Bielsa won titles in Argentina with Newell’s Old Boys and Velez Sarsfield and guided Argentina to Olympic gold in 2004 but has acquired a reputation as a nearly man in Europe. Most notably he was a losing finalist in the Europa League and Copa del Rey at Athletic Bilbao. He fell just short again as Leeds missed out on promotion last year after setting the pace for most of the season, but they put that right last term. Klopp has had his own problems with finals, losing six in succession before emphatically ending that in the Champions League in 2019. He won two Bundesliga crowns with Dortmund and further enhanced his standing by winning the Premier League last season.

Liverpool’s team has a familiar look to it with little freshening up having taken place after their Champions League win of 2019 or last season’s Premier League title success. The danger comes from their formidable front three of Roberto Firmino, Mohamed Salah and Sadio Mane, with strength built on the spine of Alisson, Virgil Van Dijk and – although injury may rule him out of this one – captain Jordan Henderson. Leeds were strong defensively in their promotion campaign and pivot around new England cap Kalvin Phillips in attack. Spain international Rodrigo and Patrick Bamford will be expected to get through a lot of work.

Klopp and Bielsa have never met before, let alone faced each other, but there is plenty of mutual admiration. “I couldn’t have more respect for what he is doing,” said Klopp. “The style they play will suit the Premier League more than the Championship and they will be very uncomfortable to play against.” Bielsa feels there are not enough superlatives for Klopp. “Anything I added would be repeating the praise he has already rightly received,” he said.