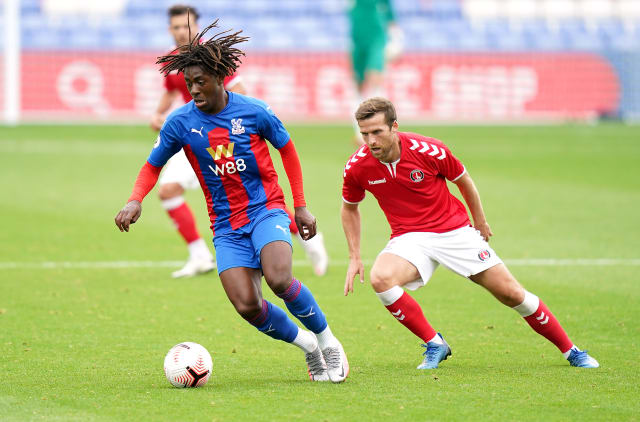 The talented attackers are expected to feature together on Saturday when the Eagles start their Premier League campaign with a home fixture against Southampton.

While that is a mouthwatering prospect for Palace supporters, the big question is how long Zaha will stay in SE25.

Once again the Ivory Coast international has been heavily linked with a move away from his boyhood club, but he is part of the squad to face Saints and is set to start.

Hodgson said: “We have made clear all along there was no intention from the club to move Wilf Zaha on.

“Realistically every year we have to face up to the prospect if a club comes in and makes a big bid for him, then we might not be able to keep him.

Interest in Zaha is nothing new, it was the same last summer, but advances from league rivals Everton were turned down due to their offers falling short of Palace’s valuation.

While the 27-year-old had to settle for a spot on the bench for last season’s opener, it will be a different story this time.

“I am looking forward to seeing him play and I am sure he will do a good job,” Hodgson said of Zaha before he reflected on the continued speculation over the winger’s future.

“I suppose it is a little bit frustrating, it would be very nice to have Wilf with us without this little cloud that hangs over him of ‘will he stay with us or do we have to wave goodbye to him’.

“He is very professional and I am surprised we don’t get more people knocking on our door willing to pay a sensible price because he is such a good player.

“I think he might get a bit frustrated sometimes that we aren’t having to turn down offers every day from some of the top clubs in the country and world because he thinks he has the ability to play there and I think so too.

“But all the time he is with us and working with me, I am delighted because he helps us win football matches.”

Another player who will help Palace in that department is 22-year-old Eze, who joined for an initial fee of £16million.

He only returned from a groin injury at the beginning of this week so may be on the bench against Southampton but excitement is building after he hit 14 goals in the Championship last season.

Hodgson added: “We intend to use him the same way he has been used by QPR, as an attacking midfield player, especially one who is very good at coming from the line into central areas and making things happen.

“He gets into goalscoring positions, can score goals and certainly has the ability to beat players and find passes which will create chances.

“We don’t have anything up our sleeve for him that we haven’t seen already or know he can do.

“Our job is to make sure we integrate him into the team properly and give him the time he needs, so when he does come into the team, he can hit the ground running.

“He has certainly hit the ground running in the training sessions because he has looked excellent and we are looking forward to seeing him play.”

Palace finished 14th last term and yet would have been higher had they not concluded the season with seven defeats from their last eight games.

Injuries contributed towards that sequence of results and while Gary Cahill, James Tomkins, Mamadou Sakho, Patrick Van Aanholt, Nathan Ferguson, Christian Benteke and Connor Wickham are still unavailable, Hodgson is sure of a fresh start.

“Certainly there has been no hangover, the mood has been very good and the enthusiasm as great as ever,” the 73-year-old insisted. “The character of the squad is strong and that will see us through a lot of hardships.”