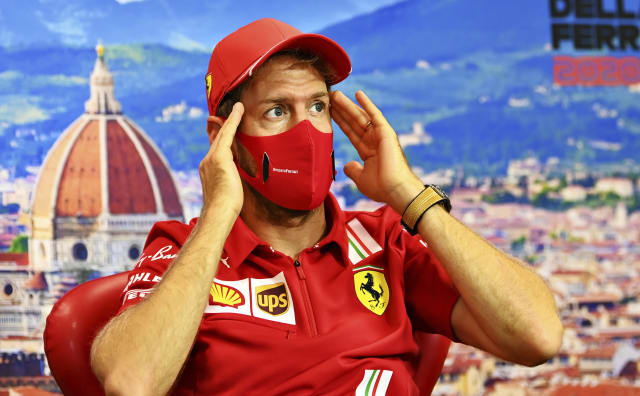 Quadruple world champion Sebastian Vettel said he came close to retiring from Formula One after admitting he “failed” at Ferrari.

The 33-year-old German’s move to Racing Point, which will be rebranded as Aston Martin in 2021, hijacked the media day previewing Ferrari’s 1,000th Grand Prix here in Mugello.

Vettel was deemed surplus to requirements by Ferrari after they elected to replace him with McLaren’s Carlos Sainz following Charles Leclerc’s emergence as the Italian team’s main man.

Vettel heads into the ninth round of 17 this weekend a lowly 13th in the championship following the worst campaign of his career.

Asked how close he came to hanging up his helmet, Vettel responded: “I don’t know if there is a measure of how close you can get, but it was close in terms of having a lot of thoughts and deciding that ultimately I have to put myself first and what’s best for me.

“And what I have decided, I believe, is what is best for me and I’m looking forward to proving that.”

Vettel, who won four consecutive titles with Red Bull between 2010 and 2013, and in terms of victories is the third most successful in the sport’s history behind only Michael Schumacher and Lewis Hamilton, was signed by Ferrari to end a drivers’ championship drought which stretches back to 2007.

But the Ferrari hierarchy grew tired of a number of error-strewn seasons from Vettel which allowed Hamilton to march to the last three world championships.

Leclerc’s arrival last year hastened his exit, with Ferrari not even entertaining the concept of offering Vettel an extension to his deal which expires at the end of the year.

“I joined Ferrari not just to join Ferrari but to win championships and obviously in that regard we have failed,” added Vettel.

“From the very beginning Ferrari had a special place in my heart because of the way I looked up to Michael.

“I wanted to do better than I did but I tried everything. I had good times and bad times but now, for both sides, it is the right time to move on.”

Vettel, who will team up with Lance Stroll, 21 – the son of Canadian fashion billionaire Lawrence Stroll, a co-owner of Racing Point – hopes the switch will breathe fresh life into his career.

Vettel’s announcement came after Sergio Perez revealed he had been dropped after seven years with the Silverstone-based team.

Racing Point have been in the spotlight this year – docked 15 points and fined £361,000 for copying parts of the Mercedes that Hamilton drove to last year’s title. They are fourth in the constructors’ standings, two places ahead of Ferrari.

Six time-world champion Hamilton said: “I just saw Seb and I am pleased to hear the news. That team has taken a huge step forward in its performance this year and they will continue to grow.

“I am biased but I believe that experience counts. Seb has had a difficult time of it at Ferrari but he is a four-time world champion and he can help steer that team. That should never be taken for for granted.”