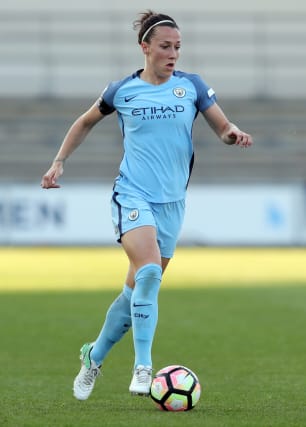 Lucy Bronze is relishing her fresh challenge of trying to help Manchester City get to “the next level” after rejoining the club.

The 28-year-old Bronze and fellow England full-back Alex Greenwood both signed for City this week after leaving Lyon at the end of their contracts.

Bronze returns having previously won the Women’s Super League, the FA Cup and the League Cup with City before departing in 2017 for Lyon and winning three Champions League titles.

City’s best effort in the European competition is making the semi-finals in 2017 and 2018 – both runs ended in defeat to Lyon, the champions for the last five seasons.

Bronze said: “I’ve had that individual success in terms of winning the Champions League in a team abroad, but I want to bring that success back to England, back to City.

“City is a team used to winning silverware anyway but I want the team to win more, be more consistent, get back to winning the league, push to make the Champions League final, and just take the team to the next level.

“I could have stayed at Lyon and had the same goals every single year but I think people who know me know I like to challenge myself, to give myself different challenges and goals, and that’s probably the biggest reason for coming back and wanting that change.”

City were runners-up, behind Chelsea on a points-per-game basis, in the 2019-20 WSL season that was ended prematurely due to the coronavirus pandemic.

City have made five signings since then, including American World Cup winners Sam Mewis and Rose Lavelle.

Chelsea have recruited Denmark captain Pernille Harder, Manchester United have also made a United States double signing in Tobin Heath and Christen Press, and Bronze admits she is “feeling very fortunate to move back now” at a time when there are so many stars in the league.

The right-back – who has stressed she only wanted a return to this country to be with City, amid other interest – also says thoughts of the England team were a factor in her coming back.

After next year’s delayed Tokyo Olympics, England host the Euros in 2022, and the next World Cup then takes place in 2023.

Bronze, a key figure in the Lionesses’ runs to the semi-finals of the 2015 and 2019 World Cups and Euro 2017, said: “To win something with England is always top of my priority list, which is a big reason for wanting to move back – to be close to the team and help influence the team more.

“What greater opportunity than the next few years? A home Euros especially, that’ll be probably the highlight of my career if I am to make it into the team and the squad.”

Greenwood arrives after one season with Lyon, having previously captained Manchester United.

The 27-year-old says she expects “friendly banter and more” when City face United.

And when asked about the response to her move, Greenwood – who has also, like Bronze, played for both Everton and Liverpool – said: “I expected this response that I’ve got – for all the negative comments, there’s 10 positive, and it’s part of the game, it’s part of football.

“I’m totally aware of everyone’s situation in the clubs they support and love, and I’ve probably disappointed a lot of fans.

“But for me, it’s about my ambition as a player, and nothing really stands in my way to achieve what I want to achieve. And that’s exactly why I’m sat here as a Man City player.

“I understand why people are frustrated, disappointed and (they are) absolutely entitled to their opinions, of course. That’s absolutely fine, it’s just football.”