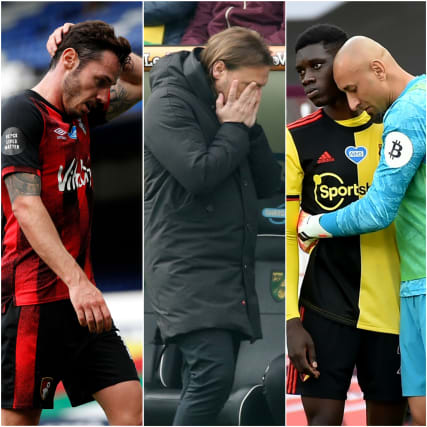 Relegated trio Norwich, Watford and Bournemouth will have to buck the recent trend if they are to make an immediate return to the Premier League.

New Hornets boss Vladimir Ivic will launch his reign in the Sky Bet Championship as his side entertain Middlesbrough on Friday evening, with the Canaries travelling to Huddersfield on Saturday, while the Cherries welcome Blackburn to the Vitality Stadium.

However, recent history suggests bouncing back at the first attempt is becoming increasingly difficult.

Only two sides – Fulham and Newcastle – have managed it in the last four seasons and just seven have done so in the last 10.

The statistics also show that relegated teams have to be prepared to go all the way – the Magpies and Burnley have gone up as champions in the last decade, but West Ham, QPR, Norwich, Hull and Fulham all did it the hard way by winning the play-off final.

Jason Tindall’s Bournemouth have lost goalkeeper Aaron Ramsdale to Sheffield United, defender Nathan Ake to Manchester City and winger Ryan Fraser and striker Callum Wilson to Newcastle in the wake of relegation, recouping the best part of £80million in the process.

Watford, who have added loan signing Glenn Murray to their squad, are preparing for the new campaign amid continuing speculation over the futures of key men Abdoulaye Doucoure and Troy Deeney.

Norwich, who have signed West Ham striker Jordan Hugill and struck loan deals for Burnley defender Ben Gibson and Tottenham midfielder Oliver Skipp, will return to the division from which they went up as champions two seasons ago with top scorer Teemu Pukki, who managed just 11 league goals last season, plundering 29 along the way.

The three newcomers, however, will by no means have things their own way, with Brentford, Cardiff and Swansea, who joined promoted Fulham in the play-off spots last season, well placed to bounced back from their disappointment.

The Bees in particular were left kicking themselves when their hopes of automatic promotion, which had been boosted significantly by a run of eight successive wins either side of the coronavirus lockdown, were dashed by successive defeats to struggling Stoke and Barnsley, which saw them finish two points adrift of second-placed West Brom.

Nottingham Forest suffered similar jitters as they collected only three of the last 18 points available to miss out on the top six altogether, while Phillip Cocu’s Derby also faltered in the face of a difficult run of fixtures.

Middlesbrough will surely be stronger under promotion specialist Neil Warnock, while Huddersfield and Stoke will need to improve significantly if they are to avoid the kind of late scramble in which they, Luton and Barnsley rescued themselves at the death.

For promoted sides Coventry, Rotherham and Wycombe, the overwhelming priority is survival, something which has proved beyond Charlton, the Millers themselves, Wigan, MK Dons, Doncaster and Yeovil in the last 10 seasons, although two sides – Southampton and Norwich – have gone straight up again.