Sport pilot events limited to 1,000 people with return of fans under review 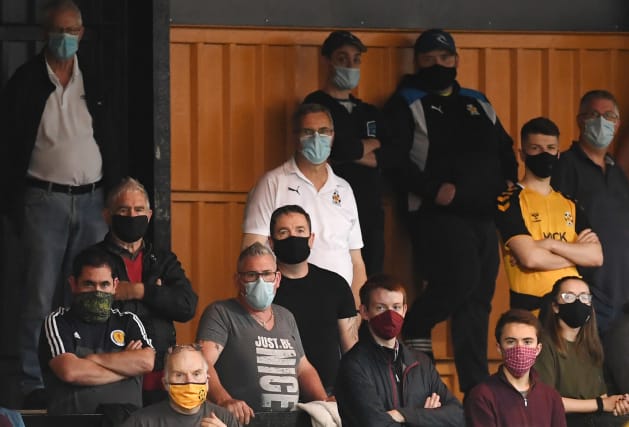 Sport pilot events in England scheduled for the rest of September will be limited to 1,000 spectators as coronavirus restrictions are tightened nationwide.

The change will come into effect from Friday and the government will also make a decision on whether fans can return to sports stadia socially distanced on October 1.

Earlier, officials from Doncaster racecourse announced that following Wednesday’s trial with crowds at the St Leger Festival, the remainder of the meeting will take place behind closed doors.

It comes as the government moved to ban gatherings of more than six people in England from Monday in response to a rise in Covid-19 cases to levels last seen during the national lockdown.

Oliver Dowden, the secretary of state for Digital, Culture, Media and Sport, in a DCMS announcement, said: “In light of increasing transmission rates, the government is reviewing the proposed sports and business events pilots ahead of the 1 October and we will unfortunately need to scale some back.

“We know fans and audiences are eager to return, and jobs depend on this too, so work continues around the clock on the moonshot project with the ambition of having audiences back much closer to normal by Christmas, if safe to do so.”

The St Leger was one of a number of events confirmed as pilot events for spectators back on August 26, in the lead-up to a planned wider return of sports spectators on a socially-distanced basis from October 1.

While organised team sport will proceed, following the recent increase in infections, plans for the anticipated return of fans to grounds from the start of October will be reviewed, as will those for attending conferences.

Mr Johnson said: “At the present time we must also I am afraid revise plans to pilot larger audiences in venues later this month and review our intention to return audiences to stadiums and conference centres from October 1.

“But that doesn’t mean we are going to scrap the programme entirely, we are just going to have to review it and abridge it and the Culture Secretary will say more about that shortly.”

Following the Prime Minister’s press conference, Oliver Dowden posted a statement on Twitter maintaining the government were continuing to “plan for the best”, but also stressing no firm decisions had yet been made.

“Further to the PM’s announcement we are reviewing the list of proposed sports pilots ahead of 1 Oct, in light of the increased number of cases. Details of changes will be announced shortly,” Dowden said on Twitter.

“We are keeping under review further easements proposed from 1 Oct but no changes have been announced today – and we continue to plan for the best.

“As I said on Sunday and the PM confirmed today, work continues round the clock on the moonshot project with the ambition of having audiences back much closer to normal by Christmas.”

Today’s racing was the first to allow in spectators since March.

Other scheduled pilot events are a Women’s Super League football match between West Ham and Arsenal on Saturday, football’s non-league finals day on September 27, race meetings at Warwick and Newmarket on September 21 and 24 respectively, a basketball exhibition match in Newcastle on September 18 and a speedway event in Ipswich on September 26.

The Premier League intends to work with the government towards getting crowds back into top-flight football games as soon as possible.

Speaking ahead of the Prime Minister’s announcement, chief executive Richard Masters told a briefing for reporters: “All I can say is that to the Premier League and the Premier League clubs stand ready willing and able to continue with our test events and test proposals and open our turnstiles from October 1 if we are given permission to do so.

“If Project Restart taught us anything it is that we have to be flexible and be willing to meet the bumps in the road. September was always going to be a difficult month.

“We have three priorities for this season. Number one is to complete it with the challenges ahead and to get 380 matches away. Second is to get fans back into full stadiums. And third to get the football economy back to full health.”

Masters, though, warned of the financial impact of games continuing to be played behind closed doors for a long period of time.

“With every match round that goes by without fans in the stadiums there are significant financial implications for all clubs – not just in the Premier League, but throughout the pyramid. You can’t get away from that,” Masters added in an interview with Sky Sports News.

“We want to work with government. We understand September is a big month with the return of schools and universities and more people returning to work.

“It is important that gets done and gets done safely. Hopefully sport can follow swiftly.”