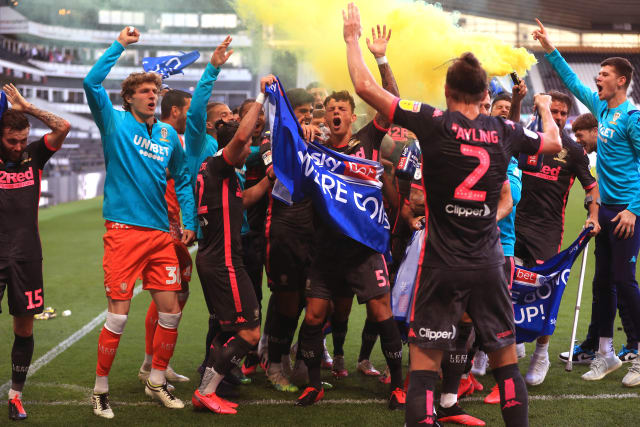 Leeds have been fined £20,000 and warned about their future conduct for the use of pyrotechnics during their post-match celebrations at Derby on July 19.

The Whites won the match 3-1 and secured promotion back to the Premier League.

However, in the aftermath they were guilty of a breach of FA Rule E20 – failing to ensure players and/or officials conducted themselves in an orderly fashion.

The independent Regulatory Commission’s written reasons stated: “At the end of that match the Leeds players and support staff celebrated exuberantly on the pitch.

“The charge against Leeds contrary to FA Rule E20 arises out of conduct during those celebrations.

“The charge is that the Leeds ‘players and/or officials used pyrotechnics devices and in doing so the club failed to ensure that its players conducted themselves in an orderly fashion’.”

It later added: “The facts which give rise to the charge are captured in a two minute video clip which we have watched.

“24 seconds into the clip yellow smoke is seen. It is coming from two smoke pyrotechnics. At least one of those appears to have been lit by one of the players shortly before.”

In summation, the written reasons read: “In light of the above, the appropriate starting point is, in our view, a financial penalty of £30,000. Taking into account the mitigation we reduce that to a fine of £20,000.

“We warn the club as to the consequences of any further failure to control its players and/or officials.”