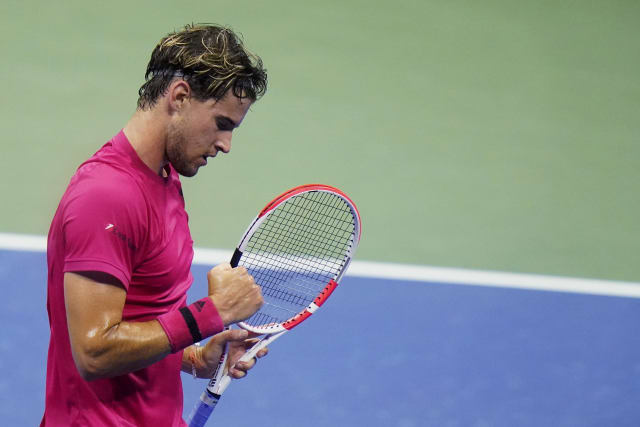 Dominic Thiem has his eyes firmly on the prize after sweeping aside Alex De Minaur to reach the US Open semi-finals.

The second seed roared past young Australian De Minaur 6-1 6-2 6-4 to move another step closer to a maiden grand slam title.

The defaulting of world number one Novak Djokovic, along with the absences of Rafael Nadal, Roger Federer and Stan Warwinka, has ensured a new name will be on the trophy this year.

And after a full throttle performance of beauty mixed with brutality, Thiem served notice that he is finally ready to step out of the shadows.

“I guess it’s somewhere in the back of the heads of all four remaining players,” said Thiem, who faces Daniil Medvedev in the last four.

“There may not be Novak, Roger and Rafa but their is Daniil, Sascha (Zverev) and Pablo (Carrena Busta).

“They are three amazing players and everyone of us deserves this first title. We will give it all. Once we step on the court we will forget about the other three.”

De Minaur managed an early break of the Thiem serve, but it was the only time he laid a glove on the three-time grand slam finalist in the first set.

The occasional unforced error began to creep in off the Austrian’s racket in the second but De Minaur was unable to take advantage.

The 21-year-old Australian had no answer to the explosive forehands and the irresistible backhands which had kept him at arms length throughout.

Down a break in the third, De Minaur briefly rallied to lead 4-3, but he allowed Thiem to take back control and has now lost all nine of the matches he has played against top five players.

For Thiem, last year’s runner-up Medvedev stands between him and a place in the final.

The third seed shrugged off an injury scare and a power outage to beat Russian compatriot Andrey Rublev in straight sets.

Medvedev saved four break points in the first set tie-break, which was briefly delayed by an electrical fault, and his 7-6 (8) 6-3 7-6 (5) win did not come without fitness concerns.

He required treatment on his shoulder for cramp midway through the third set and admitted afterwards the match might have taken a turn for the worse had he not polished off the second tie-break.

Medvedev, who let out a roar upon completing his win, said: “It was tough and that was why maybe for the first time in almost a year I celebrated my win.

“I felt like I could get in trouble so I was really happy to get the win in the tie-breaker. One point decided two sets so it was a tough match and Andrey was playing unbelievable.”

The first set between two lifelong friends swung with serve before Rublev let slip a golden opportunity to become the first man to take a set off Medvedev in the tournament, letting slip a 5-1 lead in the tie-break.

He let his frustration get the better of him as he rammed his racket into the court, and also received a code violation for an audible obscenity after Medvedev broke for the first time in the match to go 4-2 up in the second set.

Medvedev looked fully in command until midway through the third set when his movement became restricted, and his decision to call a medical time-out at 4-5 down in the set did not bode well for his hopes of claiming a maiden grand slam crown.

Under increasing pressure given his evident physical issues, Medvedev nevertheless managed to eke out another tight tie-break to take the match and book his place back in the last four.