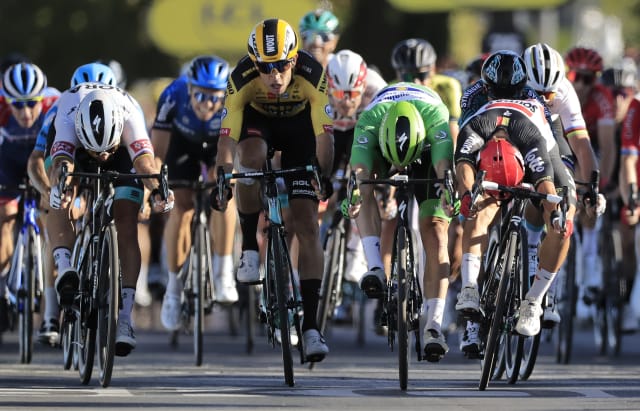 Caleb Ewan snatched his second stage victory of this year’s Tour de France as a penalty for Peter Sagan saw Sam Bennett extend his advantage in the points leader’s green jersey at the end of stage 11.

Bennett could not repeat what was his first career Tour stage win 24 hours earlier in Ile de Re as he swapped places on the podium with Ewan, his third place on the road being upgraded to second after Sagan was punished for a shove on Jumbo-Visma’s Wout van Aert, who was promoted to third.

The 167.5km stage from Chatelaillon-Plage ended in a somewhat messy sprint, with Van Aert lighting it up early before he was shoved out of the way by the hard-charging Sagan, while Ewan had the speed to round Bennett before the line.

The photo finish for second between Sagan and Bennett became irrelevant once commissaires had studied the footage again, relegating Sagan to 85th on the day.

Deceuninck-QuickStep’s Bennett was hoping to repeat the victory of fellow Irishman Sean Kelly the last time a Tour stage finished in Poitiers but had to settle for strengthening his grip on green.

If Sagan’s second place had stood his lead would have been down to 15 points, but with the penalty applied it grew to 68.

There was no change at the top of the general classification, with Slovenian Primoz Roglic of Jumbo-Visma continuing to lead by 21 seconds from defending champion Egan Bernal of the Ineos Grenadiers.

Victory for the Lotto-Soudal’s Ewan followed his success on stage three to Sisteron.

“It was very, very hectic,” Ewan said. “I knew from the first stage that I won just to stay calm and wait for the right gap to open. I just had a real desire to win today after yesterday and I’m happy to repay my team-mates with the win.”