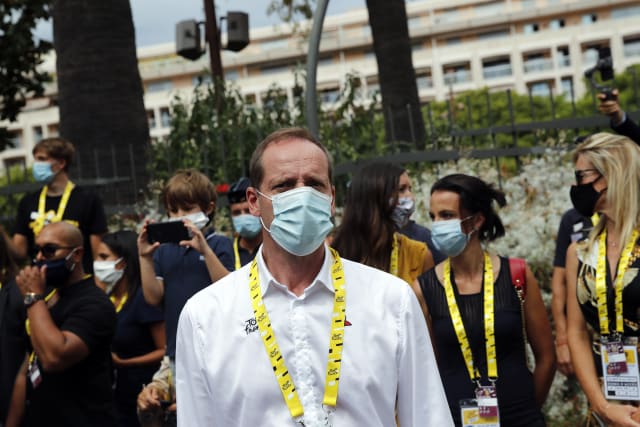 Tour de France director Christian Prudhomme was one of five individuals to test positive for coronavirus before the race resumed on Tuesday.

No riders tested positive but four team staff members did. As the four were all from different teams, all 22 teams in the race were free to line up for Tuesday’s stage to Ile de Re, with rules stipulating teams would need to withdraw if they had two or more positive cases within seven days.

An official joint release from Tour organisers ASO and world governing body the UCI did not initially name Prudhomme, but said a “technical service provider” had tested positive along with staff members from Team Ineos, Cofidis, AG2R La Mondiale, and Mitchelton-Scott.

“No rider has tested positive for Covid-19 or is considered a contact case requiring quarantine,” the release said.

A second release said that Prudhomme had tested positive and will now quarantine for seven days. He will be replaced in the race director’s car by Francois Lemarchand.

But the positive tests for the four teams, including the Ineos squad of defending champion Egan Bernal and the Mitchelton-Scott team of Britain’s Adam Yates – who enjoyed four days in yellow during the opening week – leaves them operating on a knife-edge for the next week.

A second positive test for any staff member in that time would see the respective team sent home from the race.