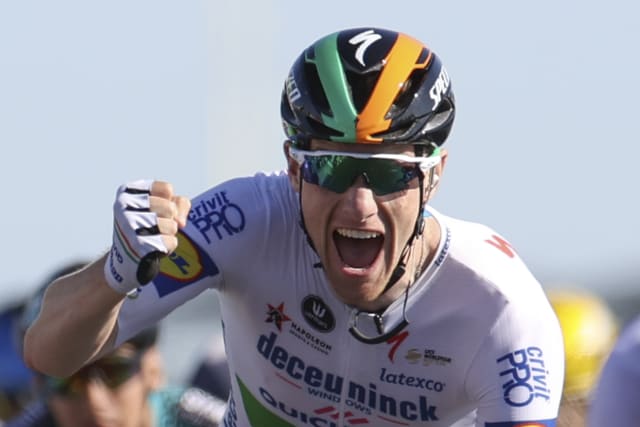 Ireland’s Sam Bennett claimed his first Tour de France stage win after a bunch sprint on the Ile de Re.

The Deceuninck-QuickStep rider took the green jersey as he pipped Lotto Soudal’s Caleb Ewan to the line on Tuesday’s 168.5km stage 10, with former team-mate Peter Sagan of Bora-Hansgrohe taking third.

There were no major changes in the general classification with Primoz Roglic retaining the yellow jersey as overall leader, 21 seconds ahead of defending champion Egan Bernal of Ineos Grenadiers.

Guillaume Martin of Cofidis was seven seconds further back heading into stage 11 with Britain’s Adam Yates, previous holder of the yellow jersey, 62 seconds behind Roglic.

Bennett’s win on an eventful day fulfilled a long-held ambition and completed a set of grand tours stage wins after previous triumphs at the Giro d’Italia and Vuelta a Espana.

The 29-year-old was emotional as he spoke to media after his win, which also vindicated his decision to move out of Sagan’s shadow and join Deceuninck.

“You dream of it and never think it’ll happen, then it does. It took a while for it to hit me.”

Bennett later admitted he did not initially think he had done enough.

He said: “It was really weird. Everything seemed to go too perfect at the end.

“I was almost in shock 50 metres from the line. I couldn’t believe it happened. I thought maybe one person got by me and after the line it just didn’t hit me.”

Sagan, who has finished lead sprinter at the Tour a record seven times, now faces a strong challenge from Bennett for the green jersey.

The Slovakian, who was second to Matteo Trentin in the intermediate sprint with Bennett third, said: “Sam Bennett showed he could win the stage and win the green jersey but we are about halfway in the Tour de France and I think there are still some opportunities to take the green jersey back.”

Anxiety levels were high throughout the day, not least with riders awaiting results from their latest set of Covid-19 tests in the morning.

All riders were cleared to race but there was drama as it emerged Tour director Christian Prudhomme had tested positive as well as staff members at Ineos, Mitchelton-Scott, Cofidis and AG2R La Mondiale.

In terms of the stage itself, there was plenty of cause for concern. The terrain may have been flat but long exposed sections of coastal road on the route from the Ile de Oleron made conditions potentially tricky with the possibility of crosswinds.

The roads themselves were also hazardous with numerous narrow stretches, roundabouts, traffic islands with high kerbs and level crossings to contend with.

There were several crashes, with the worst of them around a third of the way into the stage forcing Sam Bewley of Mitchelton-Scott to quit the Tour.

There was an early breakaway by Stefan Kung and Michael Schar but they were caught by the peloton and a bunch sprint long seemed the likely conclusion.

Roglic was pleased to come through unscathed.

The Slovenian said: “It was quite a nervous and stressful stage from the start all the way to the finish.

“As a team, we managed it really well and the guys did a really good job. We can be happy at the end of this stage and look forward to the next ones.”