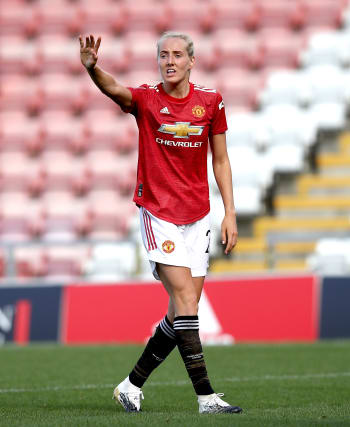 Lucy Bronze, who has left Lyon and is being linked with a return to City, and Arsenal winger Beth Mead return to the squad after missing March’s SheBelieves Cup due to injury. Chelsea’s Fran Kirby, out of action last season from November onwards after being diagnosed with pericarditis, is also back in.

Lyon’s Nikita Parris and Atletico Madrid’s Toni Duggan are not included, and the Football Association said in Tuesday’s press release announcing the squad: “Due to quarantine restrictions in place for travel from certain countries, a small number of senior players who ply their trade at foreign clubs have not been included in September’s squad.”

Also missing is City forward Lauren Hemp – the 20-year-old came off injured in the first half of the Community Shield loss to Chelsea last month – plus United midfielder Lucy Staniforth.

The Lionesses will meet up for the seven-day camp next Tuesday, and Neville, who will be leaving his post next summer to be replaced by Sarina Wiegman, said: “This is a critical moment in our development of England Women. Every camp from now on is aimed at building a team capable of competing for the highest honours in world football, including the prestigious home Euro in 2022 and, ultimately, the Women’s World Cup in 2023.

“It is important that we offer as many opportunities as possible for some of the country’s best young talent to stake their claim for a place in the senior England squad for this exciting three-year period.

“All the youngsters who have been given their opportunity today are extremely deserving of their senior call-ups, having performed strongly at club level and through England’s development teams. Now is their opportunity to prove themselves at senior international level and I am excited to see the blend of youthful ambition and senior experience.

“Introducing greater competition for places and providing opportunities for young players to develop is absolutely key to taking England Women to the next level as we begin the long build towards the home Euro and Women’s World Cup.”

England are set to face Germany away in a friendly on October 27, their first match since the 1-0 loss to Spain in early March that concluded their SheBelieves Cup campaign.

The following month, after confirmation the Tokyo Olympics and Women’s European Championships were being rescheduled due to the coronavirus pandemic, it was announced Neville would not be staying in charge beyond the end of his current contract, which runs to July 2021, and in August the FA confirmed Holland boss Wiegman will succeed Neville on a four-year deal from next September.