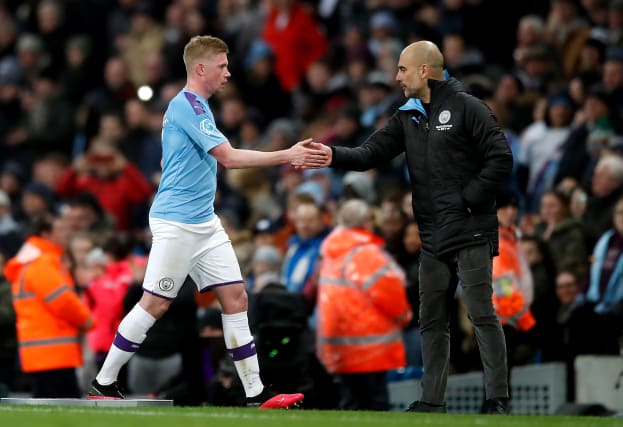 Manchester City boss Pep Guardiola hailed the contribution of Kevin De Bruyne after the Belgium midfielder was named the Professional Footballers’ Association’s player of the year.

City boss Guardiola said on the club’s official website: “To win this award is an outstanding achievement, and Kevin is so deserving of it.

“To be recognised by other players is the most that any footballer can ask for, because they understand not only what it is to compete against you, but also the level of commitment it takes to play at the very top.

“There have been many great players in this club’s history, especially over the last decade working with Roberto (Mancini), Manuel (Pellegrini) and myself.

“We have won many titles, but Kevin is the first to receive this prestigious award. This recognition is also a tribute to all the fantastic players who have come before him.

“We are so proud of Kevin and this will only strengthen what he means to this club and our fans.

“From all the players, coaches and staff at Manchester City, I would like to congratulate him.”

City trailed Liverpool by some 18 points in the final Premier League table.

De Bruyne registered 13 goals and a record-equalling 20 assists and is determined to help the team go one better again next season.

Speaking after being presented with the trophy during a virtual ceremony streamed on the PFA’s Twitter account, De Bruyne said: “We know that in two or three weeks it is going to start all again with a whole new season.

“I just came here (back to training with Manchester City), prepare myself.

“I just want to go out again and perform really well with the team and hopefully we can win some more (trophies) that we have done the years before.”