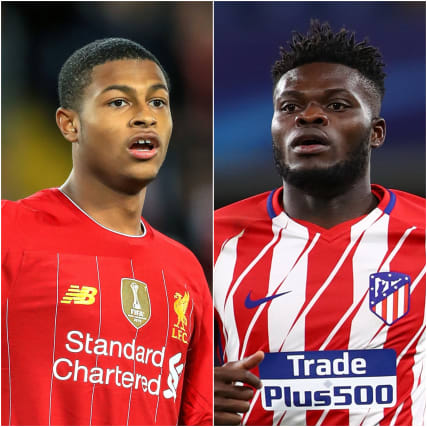 The race is heating up for the signature of talented youngster Rhian Brewster. The Sun reports Aston Villa boss Dean Smith has asked Liverpool about the availability of the 20-year-old, who impressed while on loan at Swansea last season. The Daily Telegraph says those also hoping to snap up the striker include Crystal Palace and Sheffield United, but Villa are thought to have the £20 million required.

Atletico Madrid have resisted Arsenal’s offers for Thomas Partey but that could be about to change. The Spanish club need extra funds to sign Espanyol’s 23-year-old midfielder Marc Roca and may be forced to lower their asking price for their 27-year-old Ghanaian midfielder, according to the Daily Mirror, which cites Spain’s Marca.

Wolves will bring Porto midfielder Vitor Ferreira to Molineux later this week, according to the Express and Star. They have the 20-year-old, who also goes by Vitinha, for a year and can then decide to make him a permanent fixture for  £18m.

The Telegraph reports Chelsea will sign Rennes goalkeeper Edouard Mendy for about £18m. The Senegal player has been recommended to Blues manager Frank Lampard by Petr Cech, who joined Chelsea from Rennes in 2004.

Alex Telles: Metro cites Portugal’s A Bola as reporting representatives for the 27-year-old Porto left-back flew to Manchester for talks at Old Trafford.