All Premier League fixtures in September to be televised 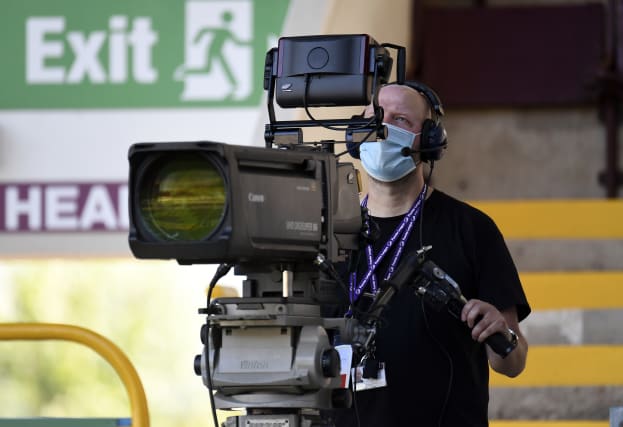 All 28 Premier League matches being played behind closed doors this month will be televised live after an agreement was reached on Tuesday, the Premier League has announced.

The league said the existing rights holders – Sky Sports, BT Sport, Amazon and the BBC – will all now screen matches in September.

Seventeen of the matches were already scheduled for broadcast but the league has confirmed that the remaining 11 will be too.

Of those 11, six will be on Sky, three on BT and one each on Amazon and the BBC.

The league is also in discussion with its radio partners BBC Radio 5 Live and talkSPORT to agree a similar situation, and is “considering appropriate arrangements for matches which will take place after October 1”.

The government is still working towards allowing some spectators back into stadiums from the start of next month, albeit with grounds still well below capacity. Initially stadiums are expected to be one third full at best.

Leicester confirmed their match against Burnley would be screened on the BBC.

“The Premier League is working on a step-by-step approach, while monitoring the developments regarding the league’s number one priority of getting fans back into full stadia as soon as possible, with safety always being our priority,” a statement from the league on Tuesday concluded.

Ian Mearns, MP for Gateshead and chair of the All-Party Parliamentary Group for Football Supporters, had written to Premier League chief executive Richard Masters last month to air his concerns over the possible blackout.

The Football Supporters’ Association had also pushed for the matter to be addressed, with its chief executive Kevin Miles describing the situation as “ridiculous”.

“Surely it can’t be the Premier League’s intention to drive fans towards the use of illegal unlicensed streams, yet we seem to be in the position where the only people who can’t legally watch those games live are the citizens of North Korea, Saudi Arabia – and law-abiding fans of Premier League clubs in the UK,” he said last month.

The Department for Digital, Culture, Media and Sport had also called on the Premier League to resolve the matter.

All 92 matches in the restarted 2019-20 campaign were shown live on TV, with 33 of them made available free to air.