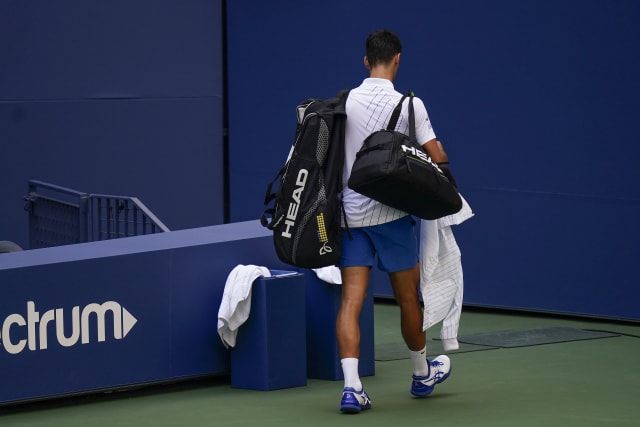 Novak Djokovic’s sensational disqualification from the US Open dominated proceedings on Sunday night.

Djokovic hit a line judge with a ball and was thrown out of the tournament, but women’s number two seed Naomi Osaka enjoyed a much more stress-free outing as she booked her place in the last eight.

Here, the PA news agency looks back at day seven at the US Open.

The stunning turn of events on Arthur Ashe Stadium where Djokovic’s hopes of winning a 19th grand slam went up in smoke is not only the biggest shock of the day, but the biggest in the sport for years. The world number one had just been broken in the first set by Pablo Carreno Busta and hit a ball out of annoyance that hit a line judge at the back of the court in the throat. After a lengthy discussion with tournament officials Djokovic, despite his strong pleas, was thrown out of the tournament.

As well as Carreno Busta, Alexander Zverev, Denis Shapovalov and Borna Coric must all be inwardly thrilled at Djokovic’s demise as it opens up their half of the draw and one of those four men will now make a grand slam final for the first time. Carreno Busta and Zverev meet in the last eight and Zverev takes on Coric with the prospect of possible glory in their sights.

The American presence in the women’s game is strong at the moment, but two lesser known names booked their place in the quarter-finals. Jennifer Brady saw off former champion Angelique Kerber to reach the last eight at a grand slam for the first time. Shelby Rogers then booked her first-ever US Open quarter-final spot by saving four match points to beat Petra Kvitova. Serena Williams and Sofia Kenin could ensure that half of the remaining eight women are American by winning on Monday.

It was going to take something special to end this 28-shot rally and Yulia Putintseva came up with a delightful drop shot during her win over Petra Martic.

Djokovic’s exit means that there will be no former grand slam champions in the last eight for the first time at any slam since 2003 Wimbledon.

Dominic Thiem could not have enjoyed a better day off, seeing his main obstacle to a maiden grand slam be disqualified, but the number two seed faces his toughest test yet when he faces Felix Auger-Aliassme in the afternoon match on Arthur Ashe Stadium. Serena Williams opens proceedings on that court with her fourth round match with Maria Sakkari. Jamie Murray comes up against his former partner Bruno Soares in the men’s doubles quarter-final.