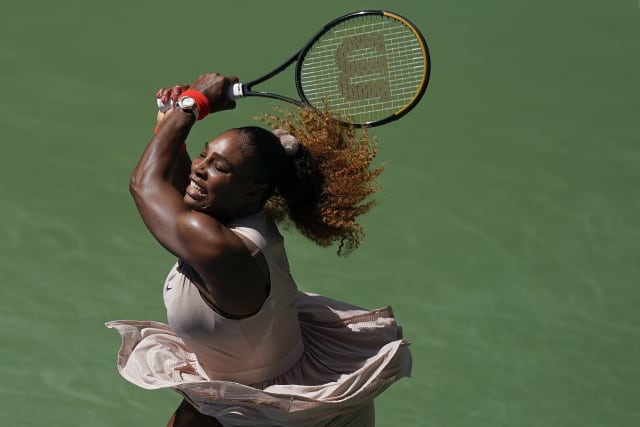 Serena Williams ensured history did not repeat itself as she battled to a fourth-round victory over Maria Sakkari to reach the US Open quarter-finals for the 16th time.

In a compelling contest at Arthur Ashe Stadium, Williams recovered from a break down in the deciding set to defeat 15th seed Sakkari 6-3 6-7 (6) 6-3.

Williams lost to Sakkari on the same courts in the Western & Southern Open last week from a set and a break up and went into the year’s second grand slam with major question marks about her form.

Discussing her recent tendency to let opponents off the hook, Williams said: “It’s like dating a guy that you know sucks. That’s literally what I keep doing out here. It’s like I have got to get rid of this guy. It just makes no sense.”

That guy was heading in through the restaurant door when Williams lost the second set on a tie-break and made a poor start to the decider, just as she had last week, but this time he was sent straight home again.

Williams played a fine first set but Sakkari, one of the best athletes in women’s tennis, stuck with her during an intense and physical second set.

The third seed let out a piercing scream after a return from Sakkari hit the top of the net and dropped dead to give her a set point at 6-5 but she saved it, and a second to force a tie-break.

Williams made a poor start, losing the first four points, but a winning return on the fifth point gave her a foothold and she saved two more set points in convincing fashion.

However, the doubts that have crept into Williams’ formidable psyche resurfaced with two errors that gave Sakkari the set.

Last week she fell apart in the deciding set, narrowly avoiding the dreaded bagel, and it seemed like the same thing might happen when Sakkari broke serve for the first time in the opening game.

But trying to finally equal Margaret Court’s tally of slam singles titles is the reason Williams is still out there competing, and she summoned all her physical and mental resolve to claw her way back.

Sakkari was now the one fighting for parity and a netted forehand at 3-4 gave Williams the crucial advantage – and this time she held onto it.