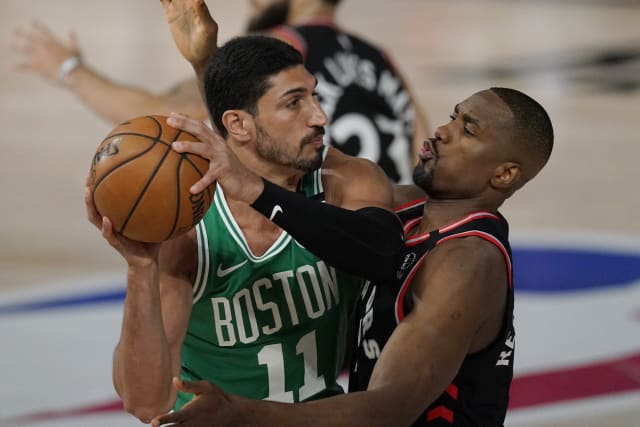 Enes Kanter has lost his Turkish citizenship, all contact with his family and receives weekly death threats – all because of a tweet.

When the Boston Celtics star criticised Turkey’s president Recep Erdogan in 2013, his social media post sparked a chain reaction that has left him stateless for three years and saw his father imprisoned.

The 28-year-old stood up for free speech and paid a harrowing price, but he explained to the PA news agency in a wide-ranging interview how fighting injustice is more important than ever before.

“It all started back in 2013, there was a corruption scandal happening in Turkey,” Kanter told the PA news agency.

“Because of the NBA platform it went viral; I saw the power of one tweet.

“My family members lost jobs and were affected so much that they had to put out a statement saying that they were disowning me. I don’t think they had any other choice.

“I remember going to a practice that day and it was one of the toughest days of my life.

“They actually put my dad in jail for a while, but we put so much pressure on them from here that they let him go.

“Some of my team-mates were saying ‘just keep your mouth shut, play your basketball, make your millions and be happy’.

“But people don’t understand, people know my story because I play in the NBA, but there are thousands and thousands of stories out there that are way worse than mine.

“I receive death threats every week, and the Turkish government revoked my passport in 2017. If you are in Turkey and criticising the government, they will put you in jail.

“But if you’re outside of Turkey and if you criticise the government they will push to put your name on Interpol’s red list and they will try to deport you back to Turkey. So I cannot travel outside of America, because if I leave I’ll be deported back to Turkey.

“I am a green card holder right now, and it takes five years to become an American citizen. So next year hopefully I’ll aim to become a citizen.

“I’ll need to pass the test of course. And so hopefully when that happens I’ll finally be able to travel outside of America.

“It would certainly be a relief to become a citizen of America; this country has given me so much.

“There’s a rapidly increasingly ideological radicalisation in Turkey, the majority of the Turkish youth are anti-Semitic and anti-west.

“Turkey sees the US and England not as friends, but as threats, and enemies. Mixing politics and religion is a dangerous idea.

“I hope one day I’ll be able to return to Turkey, but that would definitely take a change of regime.”

Kanter has set up the online petition youaremyhope.org in a bid to combat the injustices in Turkey, and has his own foundation to combat poverty and boost education.

And now he is pushing fellow NBA stars to register to vote, having convinced team bosses to allow arenas and training centres to be used as polling stations in November’s presidential elections.

“I know what it’s like to fight against injustice and for freedom,” said Kanter, who is in the midst of the Celtics’ play-off series battle with the Toronto Raptors.

“When the peaceful protests were happening, I drove 20 hours from Chicago to Boston to be with my city.

“Racism is taught, it’s not something you’re born with.

“Coming here to the bubble to complete the NBA season, we knew that basketball was a second priority. There are bigger things going on than sports right now.

“Like everyone else, after watching those videos, and I’m talking about George Floyd, or Jacob Blake, I felt sick to my stomach. So we are saying that enough is enough, and we are sick of it.

“This cannot be white against black, this is everyone against racism. This is good against evil. Why does equality even need to be a debate? So that’s what we’re fighting for so hard.

“When we had a players’ meeting about the boycott, we talked about what we could do to change this.

“One of the most important answers was voting. Voting is not only our right but it is our power.

“Don’t just talk about it, don’t just tweet about it – be about it.

“So we’ve asked our owners to make NBA arenas and big facilities accessible for voting. Because voting should not be a difficult process, it should be easy for everybody.

“We just found out that only 20 per cent of the NBA players are registered to vote, and that’s not enough. So if we’re going to inspire others, it has to start with us first.”

America’s sporting protests spread to the UK and the Premier League, with England and United striker Rashford’s free school meals fight forcing the government into a U-turn.

Hailing Rashford’s stance and urging more top sports stars to take up their own causes, Kanter said: “When you are done with your career, you don’t only want to be remembered for your game.

“If God gives you this platform, use it. Use it to affect people’s lives, use it to touch hearts, use it to make a big change.

“So it’s not about how many goals you score or baskets you shoot, it’s about what kind of legacy you’re leaving behind you.

“Once I’m done with my career I want to be known as a human rights activist before being known as a basketball player.”