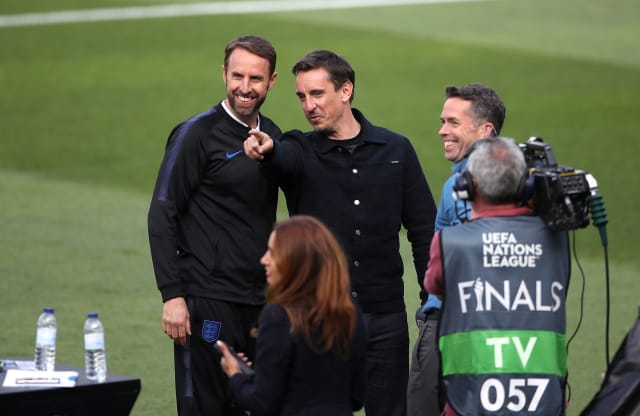 Manchester City playmaker Foden and Manchester United forward Greenwood left the England camp within 48 hours of making their Three Lions debut in a 1-0 victory against Iceland on Saturday.

The pair will miss England’s second Nations League game in Denmark on Tuesday and earned a public rebuke from their clubs after breaching the strict bio-bubble in Reykjavik.

But Neville believes his former international team-mate Southgate is better equipped than any of his recent predecessors to handle the situation.

“I would say Gareth is the one manager that England have had in the last 20 to 30 years who is most capable of making the correct decision around these types of disciplinary issues,” said Neville, who was former boss Roy Hodgson’s assistant between 2012 and 2016.

“He really has got empathy with the players and also understands that things aren’t right sometimes and you have to step in.

“I’d always trust him on those things.”

Foden, 20, and Greenwood, 18, were sent home after allegations emerged in the Icelandic media on Monday that the pair had spent time with two girls during the trip, with media outlet DV publishing purported footage filmed by one of them.

Southgate refused to confirm the exact details at a press conference ahead of the Denmark game, but described the incident as a “very serious” breach of coronavirus regulations.

The England manager said nothing happened in the area that England occupied in the hotel and that no other members of the party had been in contact with Foden and Greenwood.

“Gareth has got an immense amount of experience with England with these type of things,” Neville said of his former international colleague during a TalkTalk media opportunity.

“He was with with me after the dentist chair night and smashing up the Cathay Pacific plane on the way back from Hong Kong (before Euro 96).

“There were also incidents in ’98 with players pre-tournament and Gareth has so much experience how to deal with these types of things.

“I thought Gareth handled the Harry Maguire situation pretty well. He named him in the England squad and then later that day when Harry had an issue over in Mykonos with the court then he obviously changed his mind.

“He offered the support to the player and I think he’s handled both situations well.”

Wales boss Ryan Giggs will come up against Southgate next month in a Wembley friendly and said he had sympathy for his fellow international manager over the Reykjavik incident.

“Gareth’s having a press conference and he’ll want to win a game,” Giggs said.

“He’ll be concentrating on that when he knows questions won’t be on that.

“It’s very often that things that come as a surprise and you’ve not planned for and expected that is the most difficult part of the job.”

The Football Association has vowed to launch a “full investigation” into the circumstances leading up to the breach of the Covid-19 regulations.

The FA said Foden and Greenwood did not leave the team hotel but spent time outside the private team area, and have apologised for a “serious lack of judgement”.