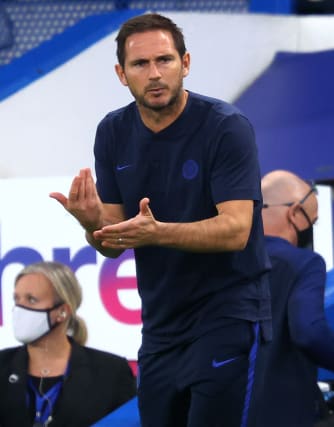 Frank Lampard has admitted he knows just how much expectations will rise at Chelsea after the Blues’ major summer recruitment drive.

Chelsea’s board have heavily backed Lampard’s west London overhaul, and the former midfielder is under no illusions that owner Roman Abramovich will expect improvements.

Chelsea finished fourth in the Premier League to secure Champions League qualification in Lampard’s first campaign, but lost the FA Cup final to Arsenal and were thumped 7-1 on aggregate by Bayern Munich in Europe.

“I’m very aware that a club like Chelsea, even though we had a transfer ban, even though the year was difficult, expectations are going to go up hugely,” said Lampard.

“And I just have to accept that as part of the job, and try and go about my job as well as I can. And then if I am having relationships, between managing up (to the board) or managing around me, I have to be as good as I can with those, because they’re really important.

“Because the tough times will come, and I’ll rely on those, all of those little ones. And it might not be managing up, that might be managing the kit man or a member of staff around you.

“Because I’ve seen how the dominoes can fall very quickly. And I think if you isolate yourself as a manager, or you don’t want to open yourself up to all of those relationships along the way, I think they fall much quicker.”

Lampard admitted expecting a “messy patch” that will challenge his managerial skills, now that the honeymoon period at Chelsea is over.

Chelsea will start the new Premier League campaign by taking on Brighton at the Amex Stadium on Monday, September 14, with Lampard and the Blues busy assimilating a string of new signings into the Stamford Bridge set-up.

“I think you have to be understanding that you’re coming to the messy patch,” Lampard told The High Performance Podcast.

“I think our messy patch probably happened actually back end of the season.

“I think we achieved a lot this season, because nobody expected us to come in the top four. But we lost a cup final, and then we lost to Bayern Munich.

“And it’s a bitter taste for me, I go away and I have a bad feel about those games.

“So I understand that those issues and problems will come again. It’s just that I, and we as staff, have to double down. We have to work harder.

“We have to analyse why we conceded 50 goals, and not just me saying, ‘yeah, it’s because of him’, and ‘he could have done better’.

“What could have I done to do better? So the messy patch is always going to come.

“Even if you’re Liverpool now, who were absolutely incredible. I’m sure Jurgen Klopp has not had his feet up for the last three weeks going, ‘OK, what great players we’ve got, we’re just going to kill it again next year’.

“It will be, ‘where’s next’. So my version of that has to be, ‘how can I keep going and improving, and be ready for the messy patch’.”

In a far-reaching podcast discussion, Lampard covered everything from his dad Frank Lampard Senior’s tough-love parenting to his own current home life.

“Oh, she definitely coaches me,” Lampard said of his TV presenter wife.

“Because I do throw a lot of things off Christine, and she’s not picking like what full-back we’re going to play that weekend.

“But at the same time, if I have certain issues which are life issues, and actually football issues sometimes, I can definitely go home.

“I’m fortunate to have that, because I think she’s very work oriented.

“I obviously love her very much but I really respect her for how she’s got on in her career and works, and how diligent she is.

“Don’t get me wrong, we have lots of downtime, but I love the fact that I have somebody there that gets working environments.

“And I love to bounce ideas, because it’s a different view, a different opinion. I can get bogged down.

“I spend so much time in Cobham I almost live in my Chelsea tracksuit sometimes; I have to take it off when I get home.

“And she goes, ‘does he have a girlfriend, a wife? Is there a problem? Have you spoken to them? Maybe you should speak to them’.

“So she’s not my life coach as such, but I’m very fortunate to have someone to bounce things off at home.”