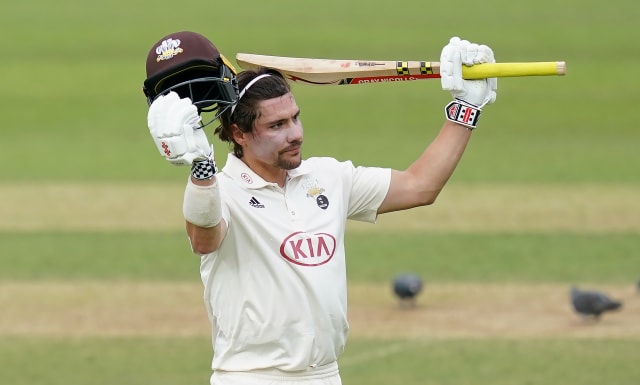 Surrey captain Rory Burns ended a lean run of form with a stylish century in his first innings in the Bob Willis Trophy at the Kia Oval but England team-mate Zak Crawley had a day to forget for Kent at Canterbury.

Burns averaged just 28.22 in six Tests against the West Indies and Pakistan this summer but on his return to first-class action with Surrey, the left-hander cut a dashing figure in hitting 15 fours in his 110-ball century.

He was dismissed for 103 as Surrey lurched from 164 for nought to 171 for four at stumps on day two, Henry Crocombe and Jack Carson each taking two wickets, in reply to Sussex’s 415 all out – a total underpinned by Tom Haines’ 117.

Crawley registered an eight-ball duck against Hampshire in his first first-class innings since becoming the third youngest England player to make a double century in a sparkling 267 against Pakistan last month.

Crawley departed to the first ball of the morning when he was pinned in front by teenage seamer Scott Currie, who finished as the pick of the bowlers with three for 42 in Kent’s 170 all out – a first-innings deficit of 21.

On a day where 13 wickets fell – Hampshire stumbled to 23 for five but Crawley also dropped a chance to reprieve Tom Scriven, whose unbeaten 42 in an unbroken 85 with Lewis McManus (50 not out) helped the visitors to 108 for five.

England slow left-armer Jack Leach returned to competitive action for the first time in 10 months, going wicketless but bowling tidily as Somerset battled back against Worcestershire at New Road.

Worcestershire reached 123 for one in response to 251 all out but Craig Overton and Josh Davey took three wickets apiece as the hosts were skittled for 200, and Somerset reached 16 for one for a lead of 67 heading into day three.

Outright victory for Somerset will seal a place in the competition final later this month, and last year’s County Championship winners Essex could be their opponents after they claimed the initiative against Middlesex.

Adam Wheater’s chanceless 83 not out lifted Essex to 236 all out at Chelmsford before Aaron Beard took three wickets in 21 balls after tea to leave Middlesex on 123 for six and a slender lead of 25.

Ben Duckett was at his scintillating best as his 146 not out, plus an unbeaten 74 from Joe Clarke, ushered Nottinghamshire to 251 for two after Durham’s 294 all out at Trent Bridge.

After Nottinghamshire had lost both openers in reaching 65 for two, Duckett and Clarke put on an unbroken 186, despite three interruptions for rain and bad light.

Liam Norwell and Will Rhodes each took four wickets for Warwickshire against Glamorgan, whose 203 all out, aided by Billy Root’s unbeaten 51, helped them claim a slender 17-run first-innings lead at Cardiff.

Derbyshire closed on 120 for seven in reply to Lancashire’s 219 all out at Aigburth, while rain ruled out the prospect of play on Monday at Headingley, where Yorkshire are 36 for two and trail Leicestershire by 88.