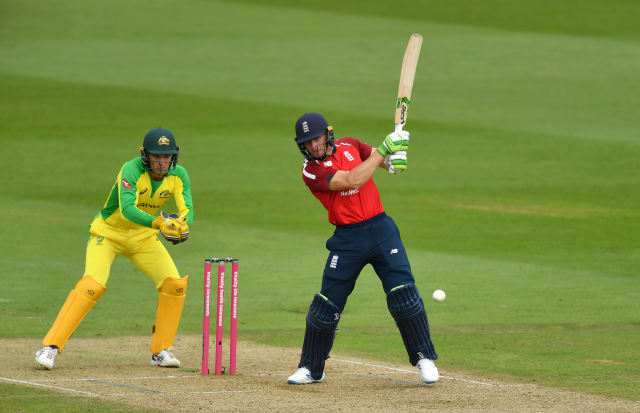 Jos Buttler hit 77 not out to help England clinch a series win over Australia with a six-wicket victory in the second Twenty20 international at the Ageas Bowl.

The wicketkeeper had looked in top form during Friday’s first encounter between the sides and followed it up with his highest score in the sprint format for England.

Jofra Archer and Mark Wood bowled with express pace and Chris Jordan grabbed two wickets to restrict Australia to 157 for seven after the visitors had won the toss in Southampton.

Archer was straight into his stride and saw off David Warner for a three-ball duck when he glanced the glove of the Australian opener.

Buttler claimed the catch and there was 90mph bowling from both ends with Wood also hitting top gear on the speed gun.

The decision to promote Alex Carey backfired when Wood enticed an edge and Australia were now reeling on three for two.

Archer finished after two overs having hit 95.8mph and nemesis Steve Smith pulled Tom Curran for six before he was run out for 10 going for a quick single.

England captain Morgan picked up superbly at short mid-wicket and with only one stump to aim at, hit his target brilliantly but Finch and Marcus Stoinis staged a recovery.

The duo had put on 49 when Finch, fresh from two boundaries off Chris Jordan, chopped on 10 short of a half-century and a turning delivery from Adil Rashid accounted for Stoinis as he could only guide to Malan at slip to give the leg-spinner figures of one for 25.

England’s fast bowlers, who had excelled at the beginning of the innings, were slightly more expensive at the death, but Jordan ended with two for 40 to edge closer to Stuart Broad’s record tally of 65 T20 wickets for England.

Archer finished with one for 32 after his final over went for 18 and was extended by three wides as Australia eventually made 157 for seven.

Buttler started like a train in Friday’s narrow victory by two runs, but was more measured this time and even more so when Jonny Bairstow exited for nine after he knocked off the bails with the top of his bat.

Mitchell Starc claimed the wicket and Finch gambled by keeping him on for three overs, but he was crunched for two boundaries by Malan.

At the end of the powerplay the hosts were 44 for one and England’s form white-ball player ensured the run rate continued to increase.

Malan reverse-swept and then cut Maxwell away for consecutive fours in the ninth over of the innings and produced the same against Adam Zampa to bring up the fifty partnership off 41 balls.

Not to be outdone, Buttler pushed Kane Richardson through cover for a boundary and then welcomed Ashton Agar with a reverse sweep for four.

There was to be no fifty for Malan this time after he picked out Stoinis at deep mid-wicket to depart for 42.

But Agar’s celebrations were cut short when the next ball was driven for four to bring up Buttler’s half-century from 38 balls and he added another via a reverse-swept.

Australia needed more wickets and Tom Banton chucked his away when he hit straight to Cummins on the boundary rope.

It was suddenly game on when Morgan whacked Zampa straight to Maxwell with 23 required off 18.

But Moeen Ali made sure there would be no collapse with a maximum before fittingly Buttler struck a huge six down the ground to see England home by six wickets to clinch the series victory.