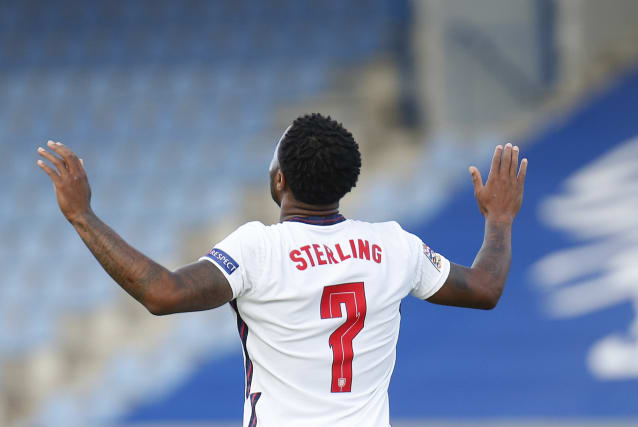 Gareth Southgate believes Raheem Sterling has taken his game to “another level” and that his late penalty winner against Iceland proves England are not overly reliant on Harry Kane.

Sterling coolly stroked home a last-gasp spot-kick as the Three Lions ended a 10-month hiatus with a 1-0 Nations League win in Reykjavik on Saturday.

The Manchester City forward played the whole game despite only recently returning for pre-season training and converted the penalty he had won himself – before Iceland missed their own spot-kick just moments later.

England had toiled for much of the afternoon, particularly following a red card for Sterling’s club-mate Kyle Walker, but Southgate was full of praise for the man who scored his 11th goal in his past 12 international appearances.

“It has a massive impact on everybody around him and really has taken his game to another level.

“I can’t speak highly enough of him really, it would have been very easy to have another few days on the beach, not report in, get himself right for his club at the beginning of the season.

“His mentality the whole week has been exceptional. Desperate to be here, desperate to play, desperate to stay on, I thought he carried the fight when we went down to 10 men.

“He took the responsibility of the penalty, and I thought it was outstanding character throughout – his desire to win and succeed is exceptional.”

England are back in action on Tuesday night for another Nations League away clash, this time meeting Denmark in Copenhagen.

Given that the new domestic season is not yet under way, Southgate is likely to have to juggle his side.

Captain Harry Kane, in particular, looked off the pace for much of the win in Iceland – even if he did see an early goal incorrectly ruled out for offside.

Kane’s return to pre-season training with Tottenham was delayed after he was forced to quarantine as per the UK coronavirus regulations following a holiday in the Bahamas.

The 27-year-old has scored 32 goals in just 46 England appearances, including winning the Golden Boot at the 2018 World Cup.

But with the likes of Sterling also finding his scoring boots for his country, Southgate does not feel any future success would rely solely on Kane.

“Harry is a supreme goalscorer and is critical to the way we play,” he said.

“Equally, we have some tremendous threats which will be clear as the next few months develop with Raheem in particular.

“Obviously we’ve spoken about Jadon (Sancho) already, Mason (Greenwood) is coming though, Marcus Rashford is of course at home.

“The nice thing is that we won’t be leaning just on Harry and I think games like the win in Spain (a 3-2 Nations League victory in October 2018, with two Sterling goals and one from Rashford) show that goals can come from elsewhere.”

Given Southgate’s probable selection headache, it remains to be seen if either Sterling or Kane will face Denmark, with Southgate adding: “I think the most important thing over the next few days will be to really assess who can do that (play twice in three days).

“What will give us the freshness but keeps enough experience, to keep the balance of the team right.

“Energy will be key. And I think you saw through the Iceland game, particularly through the first 20 minutes, that match sharpness through all of our players.

“It is impossible to expect them to be at their best, given not only the time since their last competitive games, but also the shortage of training minutes, so the last part to come is that sharpness around the final third.

“Although they were in the right positions, they were trying to do the right things, to break down that packed defence on a slightly stodgy pitch was a real challenge, and that little bit of quality just wasn’t there.”