Dustin Johnson builds lead with impressive third round in Atlanta 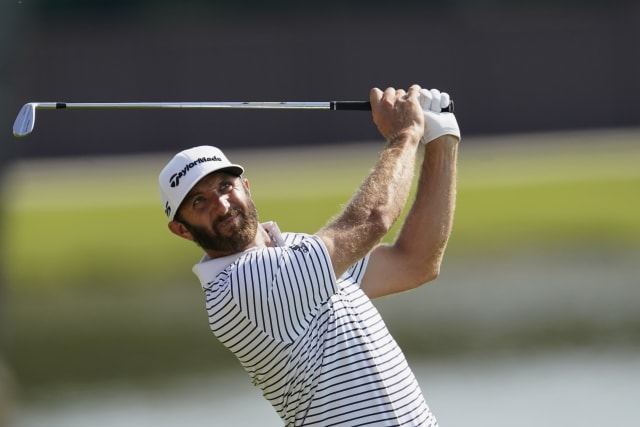 World number one Dustin Johnson continued his brilliant recent form to remain firmly on course to pocket the first prize of £11.2million at the Tour Championship in Atlanta.

Johnson, who as FedEx Cup leader began the week on 10 under par due to the controversial handicap system adopted in 2019, carded a third round of 64 at East Lake to improve to 19 under par overall.

Fellow Americans Justin Thomas and Xander Schauffele are his nearest challengers on 14 under following rounds of 66 and 67 respectively, with Spain’s Jon Rahm a shot further back after a 66.

It is the fourth event in a row in which Johnson has led or shared the lead after 54 holes.

The 36-year-old finished second in the US PGA Championship, won the first play-off event by 11 shots and then lost a play-off in the BMW Championship last week, where Rahm holed from 66 feet for birdie on the first extra hole.

“It’s something that’s a goal of mine, to be a FedEx Cup champion, something that I really want to do,” Johnson said after a round containing seven birdies and a solitary bogey.

“Still got one more day. I like the position I’m in but I’m going to have to shoot a good score if I want to hold up the trophy at the end of the day.”

Johnson had hit just two fairways in his second round of 70 but found 11 out of 14 on Sunday and added: “On this golf course if you hit the fairways it’s not easy but it gives you a lot better chance to shoot a good score.

“I worked on the driver a little yesterday afternoon after the round and figured it out a little bit.”

Thomas, who won the FedEx Cup in 2017, has not given up hope of a second title despite his five-shot deficit.

Defending champion Rory McIlroy is 11 shots off the lead after a disappointing third round of 70.

McIlroy, who celebrated becoming a father for the first time with the birth of
daughter Poppy on August 31, made the ideal start with a birdie on the first, but then followed six pars with a bogey on the difficult eighth.

Two birdies and two bogeys on the back nine meant McIlroy continued to tread water and a frustrating day was summed up when the world number four three-putted from long range for par on the par-five 18th.