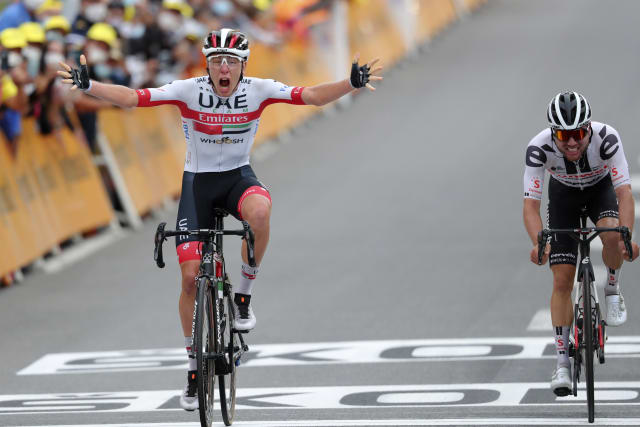 Yates lost touch with the main group of contenders on the Col de Marie Blanque, late on the 153km stage from Pau as Roglic, Pogacar, Egan Bernal and Mikel Landa were able to break free when the group of favourites splintered.

Team Sunweb’s Marc Hirschi had gone clear out of the remnants of the day’s breakaway on the Col de la Hourcere and looked like soloing to victory, only to be caught by the charging group of contenders inside the final two kilometres on the flat run to the finish.

Hirschi recovered to join the sprint to the line but was narrowly beaten by Pogacar and Roglic.

The Swiss rider’s presence cost fourth-placed Bernal some valuable bonus seconds on the line as the general classification received a big shake up.

Jumbo-Visma’s Roglic now leads by 21 seconds from the defending champion, with the French duo of Guillaume Martin and Romain Bardet third and fourth, 28 and 30 seconds down respectively.

Yates finished in a group some 54 seconds later to send him tumbling down the general classification after a fourth day in the leader’s yellow jersey.

The Mitchelton-Scott rider now sits eighth, 62 seconds off the lead, and will revert to his original plan of targeting stage wins.

“I did my best,” he said. “I knew coming into the race I wasn’t 100 per cent. I gave everything I could to hang on. I think we can be pretty proud of what we did. We’ll freshen up with the rest day and go after some stages.

“I did what I could but there were just some guys with better condition than me. It is what it is.

“There are a lot of stages in the last week that suit me quite well so we’ll see what we can do. It’s a big honour to ride in yellow and it was fun while it lasted.”

Pogacar was among the contenders to lose 81 seconds in crosswinds on Friday, but he recovered time on Saturday’s first Pyreneean stage and his stage victory here came with 10 bonus seconds that move him above Yates into seventh place, 44 seconds off his close friend Roglic.

The pair almost collided at the top of the Marie Blanque during a moment’s loss of concentration, but were all smiles at the end of the stage.

“It was really crazy, and after that hard day to win the stage is incredible,” the 21-year-old Pogacar said.

“Thank you to my team-mates, they did a really good job all day so I’m really happy to pull out that victory.

“I just wanted to gain as much time as I could in the GC but in the last 800 metres I knew that a stage win is also 10 seconds so I was focused on the sprint and it was just full gas.

“Primoz is really good. He has won (stages) before and he will win again. I hope we can do together great things.”