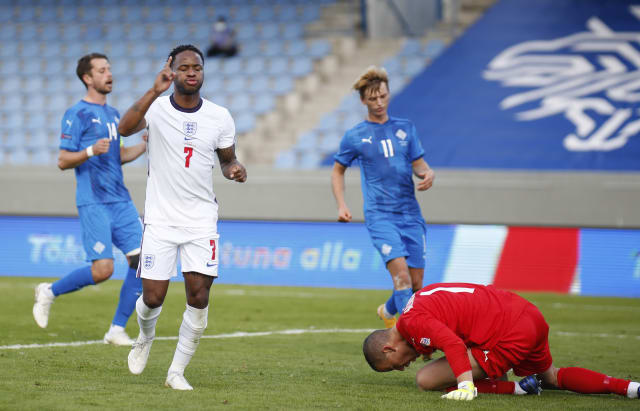 With March’s friendlies scrapped and Euro 2020 postponed due to the coronavirus pandemic, the Three Lions returned with a whimper in front of empty stands in Reykjavik after their enforced 10-month break.

Harry Kane’s disallowed opener and Kyle Walker’s sending off looked to have been the key moments in Iceland, only for England to snatch a late 1-0 win as Birkir Bjarnason blazed over a penalty moments after Sterling slotted one home.

It was mad ending to an otherwise forgettable match that had a distinct pre-season vibe about it, with precious little quality attacking quality on display.

England were nothing like their free-flowing best at Laugardalsvollur, where the absence of a video assistant referee meant Kane’s early opener remained ruled out for offside.

That was the closest Southgate’s side got in a first half in which they enjoyed 76 per cent of possession but struggled to create, even with playmaker Phil Foden making his first start.

Iceland were defending resolutely and England’s afternoon was made all the more difficult when Walker picked up a second booking with 20 minutes remaining.

Danny Ings and debutant Mason Greenwood came on in a bid to spark a late winner, which arrived at the death after Sverrir Ingason was adjudged to have handled Sterling’s shot. The Iceland man was given a second booking and the England forward rolled home the penalty.

But the drama did not stop there. Joe Gomez gave Iceland the chance to level from their own penalty, but former Aston Villa midfielder Bjarnason missed the target.