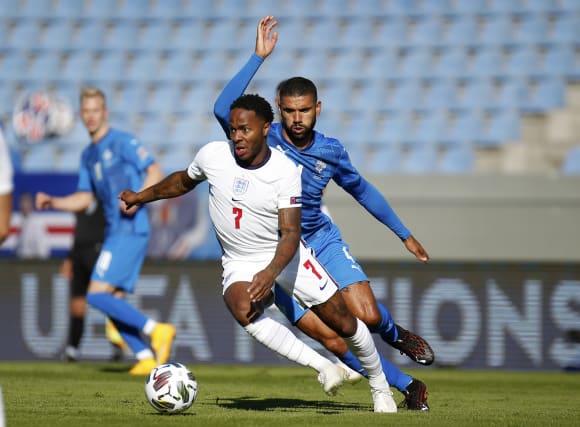 Raheem Sterling praised 10-man England for picking up a win in “strange” circumstances as his last-gasp penalty earned a 1-0 Nations League victory over Iceland.

Playing their first match in 10 months due to the coronavirus pandemic, the Three Lions were far from their best and could be considered somewhat fortunate to emerge victorious in Reykjavik.

They lost Kyle Walker to a red card midway through the second half and, after Sterling had put them ahead with a 90th-minute penalty, saw Iceland miss a spot-kick of their own when Birkir Bjarnason blazed over.

“It was definitely strange, the first game back,” said match-winner Sterling, who insisted he was always confident he would tuck away his penalty.

“It (the game) was my third training session this week so we always knew it would be difficult but there is no better way to get your fitness than in matches.

“It was tough but we got through it, we knew we had to challenge ourselves and find something deep within.”

He added on Sky Sports: “We didn’t expect the red card but it happened and we kept trying to play our football… we got the penalty in the end.

It may not have been the most memorable of matches for most, but it was an unforgettable one for Sterling’s Manchester City team-mate Phil Foden, who was handed his England debut.

“It feels amazing, it is a dream come true,” the 20-year-old midfielder said.

“It was a very difficult game, they defended well and we showed great character to stick in the game and luckily got the penalty at the end and scored.

“We all just tried to play our football and do what we do at our clubs, it was frustrating at times and we couldn’t break them down.

“I play at Man City and now play for England, it is very similar, a very high standard.”