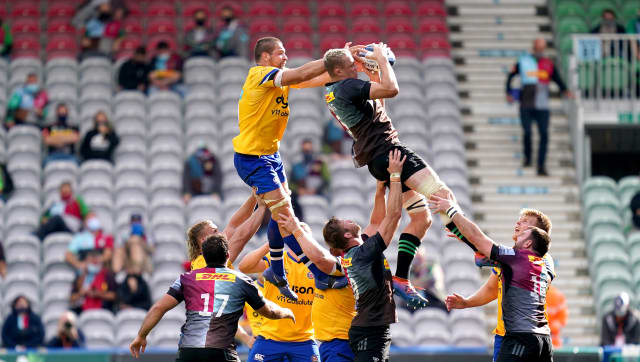 Harlequins boss Paul Gustard admitted the 41-27 defeat by Bath was a blow to everyone connected with staging the Gallagher Premiership’s first test event.

A total crowd of 3,500 that included 2,700 fans gathered at Twickenham Stoop as a successful pilot for rugby following the five-month interruption caused by the coronavirus pandemic.

Quins made a blistering start and scored a try through centre Joe Marchant, but once Ruaridh McConnochie ran in the first of his two touchdowns, they faded from contention.

“I’m disappointed with the performance. It’s sad that we had 3,500 people in here but didn’t get the result we want.

“From the point of view of normality, it was great to see a crowd back. For the first 20 minutes we gave them something to cheer about, for the next 50 we didn’t.

“Making the top four seems very tough now. The top four are pulling away now and leaving people like ourselves behind.”

Bath director of rugby Stuart Hooper hopes the event in south west London heralds the return of fans at grounds across the league.

“It’s imperative to get fans back as soon as possible and as safely as possible. It felt exciting,” Hooper said.

“To see and hear supporters and to feel the excitement build around the stadium was a big step forward. As soon as we can get it done safely around the country, then let’s get it done.”

McConnochie produced a classy finish in each half to propel Bath out of sight in a one-sided bonus-point victory that was effectively over two minutes into the second half once the England wing had scored his second.

Eddie Jones was watching from the stands and could add to the former seven specialist’s two caps won during England’s autumn campaign last year.

“The first try was just reward for chasing the kick. Often those go unnoticed but he does so much unseen work it’s incredible,” Hooper said.

“The second try was class. It was quality because he takes the ball in very little space on the left and dances his way down the touchline.

“But you also see his little step at the end for the finish. It was very calm and at the moment he’s on fire.

“Ruaridh loves playing for Bath and giving a good account of himself. If he keeps doing that he’ll definitely play for England again.”