Patience was vital for Ian Baraclough’s Northern Ireland in Romania 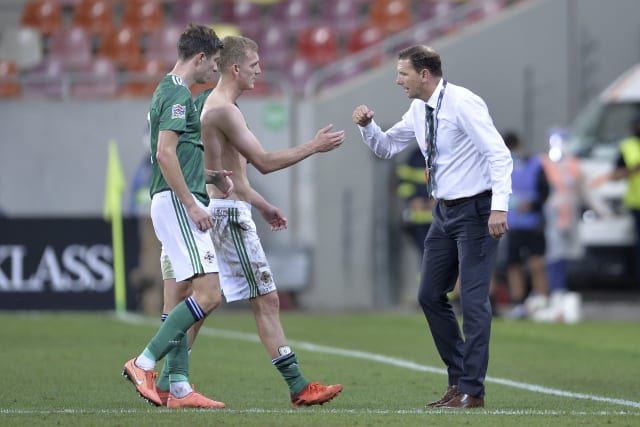 Ian Baraclough preached patience to his players before 10-man Northern Ireland overcame first-half rustiness to take a hard-earned point from Romania in his first match in charge on Friday night.

By half-time few would have backed the Green and White Army to get much out of the match as they found themselves a goal and a man down, having had Josh Magennis sent off six minutes before the break.

With 20-year-old debutant Daniel Ballard filling in for the absent Jonny Evans in defence, Bailey Peacock-Farrell came under a second-half barrage of shots but Baraclough had told his players to keep the faith.

“I don’t think we used the ball well in the first half but we didn’t panic,” Baraclough said.

“We’re in our pre-season back home and some of the lads haven’t kicked a ball in anger since March so there are going to be mistakes. We had to not panic and not get too uptight about it.”

It paid off as Gavin Whyte came off the bench to head home an 86th-minute equaliser, with time left for Peacock-Farrell to make another outstanding save to push Denis Alibec’s rising shot on to the crossbar.

“Credit to the Romania team, they were sharp, they moved the ball well and will probably feel they should have won the game,” Baraclough added.

“When they did create chances they came up against a goalkeeper in inspired form who made three or four world-class saves. At times you have to ride your luck a little but credit to the players, they gave everything and it was an absorbing game to watch. I enjoyed the game.”

Ballard had been expecting to be in Malta playing for the Under-21s, but was called into the senior squad last week when Tom Flanagan withdrew, and was thrust into the starting line-up as Evans did not travel for personal reasons.

It was a remarkable turnaround for a player who saw a loan to Swindon cut short by a serious knee injury last season, and has lacked first-team football himself as a result.

“From two weeks ago, going with the Under-21s, to be called into the seniors, I was very proud of that,” the Arsenal defender said. “And then to actually start the game was an even bigger shock, and definitely one of the proudest moments of my life.

“(Baraclough) just tried to reassure me. I’ve played under him quite a bit with the Under-21s and he gave me my debut against Spain in a win. I’ve always played well under him and he had that confidence to put me in without any hesitation.

“He told me he had confidence in me and gave me the belief, and I’m extremely happy.”