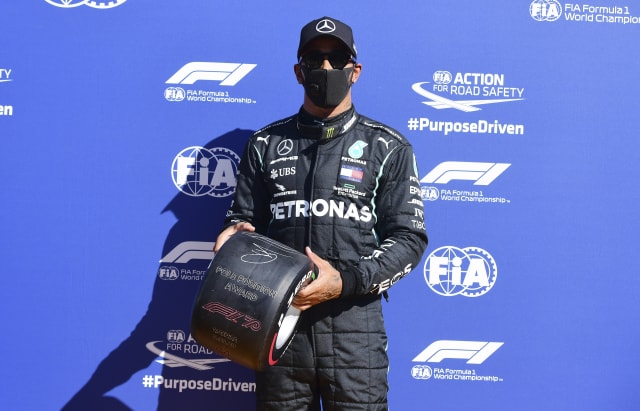 Lewis Hamilton said Formula One’s plan to slow him down was bound to fail after he set the fastest lap ever recorded in the sport to take pole position for Sunday’s Italian Grand Prix.

Hamilton flew around Monza’s 3.54 miles and 11 corners of asphalt in a staggering average speed of 164.267mph. He edged out Mercedes team-mate Valtteri Bottas by seven hundredths, with McLaren driver Carlos Sainz a surprise third.

On a bleak afternoon for Ferrari, Charles Leclerc and Sebastian Vettel finished 13th and 17th respectively. It marks the first time in 36 years that both scarlet cars will start their home race outside of the top 10.

With Ferrari in the midst of their worst crisis in a generation, Hamilton continues his crushing stranglehold of the sport.

This was his 94th career pole, his seventh in Monza, and he will start as the favourite to win for a 90th time on Sunday, moving him to within just one victory of Michael Schumacher’s record.

Hamilton’s mind-boggling lap – which eclipsed Kimi Raikkonen’s average speed of 163.785mph set by the former Ferrari driver here in 2018 – came after the FIA outlawed a high-performance engine setting, believed to have benefited the world champion and his Mercedes team. Hamilton has previously referred to the qualifying power boost as “party mode”.

But Sainz, the first non-Mercedes car, finished more than eight tenths behind Hamilton. Max Verstappen, 47 points the British driver, was almost a full second back in fifth.

“I did say that they brought in this new rule to slow us down but it wasn’t going to make a difference,” said Hamilton. “We have a great, great car and we are better in other areas.

“It has been an incredible performance this weekend. This is definitely the best we have been in Monza. We have got the car in a sweet spot.

“We are continuing to take steps forward which is such a hard thing to do. People take it for granted because we do it every weekend but I certainly don’t.”

Hamilton led a procession in Belgium a week ago, and, on Sunday, he will be expected to claim his sixth win from eight rounds in similarly imperious fashion. Indeed, an image projecting Hamilton’s pole as his 90th win was prematurely screened in the moments after qualifying.

“If Usain Bolt wins every race and Bayern Munich wins every championship, the result is predictable,” said Hamilton’s boss Toto Wolff, who is on course to oversee a remarkable seven consecutive drivers’ and constructors’ championships as Mercedes team principal.

“Everyone wants to see the underdog perform and we are aware of that dynamic. Therefore we are coming up with suggestions to make it more exciting.

“One of the ideas I voiced last week is to open up the intercom channels between the pit wall and the garage which would show how much drama is behind winning a race. At Spa, people thought it was a walk in the park, but it wasn’t. This drama transmitted during the race to the broadcasters would create more excitement.”

Mercedes’ supremacy is in stark contrast to that of Ferrari. Chief executive Louis Camilleri has, publicly at least, given his backing to beleaguered team principal Mattia Binotto.

But the 50-year-old is facing further questions over his immediate future after another miserable display from his underperforming team. They are fifth in the constructors’ standings, a morale-sapping 203 points behind Mercedes.

Here, Vettel was the first to fall, knocked out of Q1 after he came unstuck in traffic. “What a mess”, he said.  Leclerc, who won in front of the adoring tifosi last year, made it through to Q2 but failed to trouble the next stage. He was eliminated in 13th.

In 70 editions of their home race, reliability issues aside, Ferrari have always had at least one car in the top 10. That streak would now appear in grave danger.