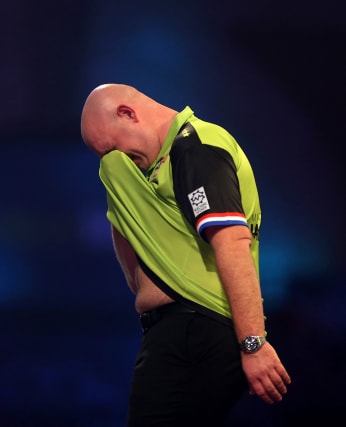 Michael Van Gerwen crashed out of the Premier League darts following a heavy 8-2 loss to Daryl Gurney on the final night of the group phase.

The five-time winner of the competition has won the league phase in each of the last seven years but he will not even contest the play-offs this time round.

With four victories from six matches, Van Gerwen travelled to Milton Keynes, where the league phase resumed behind closed doors due to the coronavirus pandemic, well placed to advance once more.

However, just four wins in the remaining 10 rounds of matches, coupled with five defeats, saw the Dutchman eliminated.

He was still able to reach the play-offs with a victory over Gurney on Saturday night but the three-time world champion had trouble hitting doubles, hitting only two of 13 attempts, and he quickly slipped 6-0 behind.

Van Gerwen finally rattled in a 121 finish in leg seven, at least avoiding a whitewash, but it was soon 7-2 and Gurney wrapped up a comprehensive success with a 104 checkout to send MVG home.

Premier League debutant Nathan Aspinall clinched his place in the play-offs with an emphatic 8-2 defeat of Glen Durrant.

The former UK Open champion scored an average of over 101, took out 170 and achieved a strong checkout percentage of 61.

Aspinal led 3-0 and 6-1 before Durrant took another leg. However, ‘The Asp’ finished off the match in style with a 124 checkout.

The convincing win saw the Englishman finish third in the rankings above Gary Anderson, who was beaten 8-3 by Gerwyn Price.

Price had to win to stand any chance of progressing and he held up his side of the bargain, averaging 107.70 during a match which saw Anderson hit a 170.

Things looked promising when MVG lost but the Welshman needed Aspinall to lose in order to go through.

Reigning world champion Peter Wright, who thrashed Van Gerwen 8-1 on Wednesday, rounded off the group phase with an 8-5 win over Michael Smith. His victory means he takes the second place in the rankings.

Wright was heading for another statement win, but saw Smith suddenly get going at 7-2 down.

However, after clawing back three legs, Wright hit a 13-darter in leg 13 to seal things.

Wright will play Aspinall in the semi-finals, while Anderson takes on Durrant.