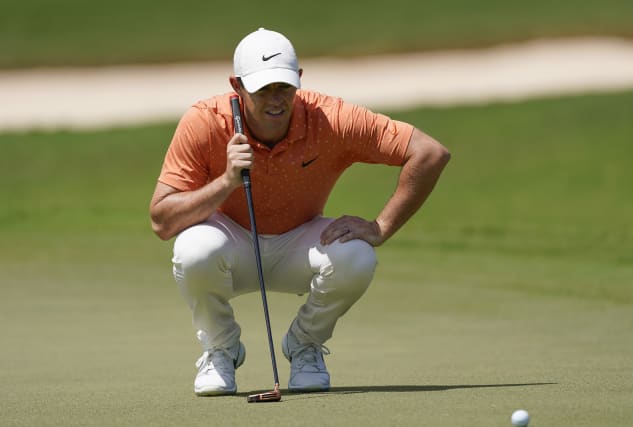 Rory McIlroy’s FedEx Cup chances were dealt a blow as water trouble at the 18th left him five shots off the lead heading into the third round of the Tour Championship in Atlanta.

McIlroy, who earlier this week celebrated becoming a father for the first time with the birth of daughter Poppy, had recovered ground from the handicap system with a superb 64 at East Lake on Friday.

After sinking a birdie at the par-five sixth, the Northern Irishman found himself one-over par heading into the turn following successive bogeys.

But the four-time major winner kept his composure to plot a safe passage past trees to the green at the 10th and immediately recover with a birdie.

McIlroy, however, was left frustrated at the par-five 18th after shanking his second shot into the water and seeing his long par putt lip out to finish one over for the day and sit eight under par for the tournament.

FedEx Cup leader Dustin Johnson retained the lead despite some wayward tee shots, heading into the halfway stage following a testing even-par round to sit at 13 under.

The American is one ahead of Sungjae Im, who produced a six-under 64, with three birdies over the closing four holes.

Johnson endured a difficult day, with two bogeys on the back and front nine, but finished with a birdie to keep himself in front.

Xander Schauffele is third on 11 under, a shot ahead of compatriot Justin Thomas after the two Americans had contrasting back nines.

Schauffele produced a five-under 65, with a run of three birdies during the closing four holes, but Thomas dropped shots on the 14th and 18th

Englishman Tyrrell Hatton sits in a tie for fifth at nine under.

Hatton signed for a 66 and said on Sky Sports Golf: “Hopefully I can keep giving myself chances.

“You have to be aggressive, but also sensible because there are some sucker pins out there.”

Collin Morikawa climbed up to nine under after his 65.

Jon Rahm had shared the overnight lead with world number one Johnson.

The Spaniard, though, dropped down to share fifth after a four-over 74 – which included a double-bogey five at the 15th where he found water off the tee.

Colombia Sebastian Munoz is at seven under following his 65, which included three birdies heading into the turn.

American Patrick Reed is one shot back after his four-under 66.