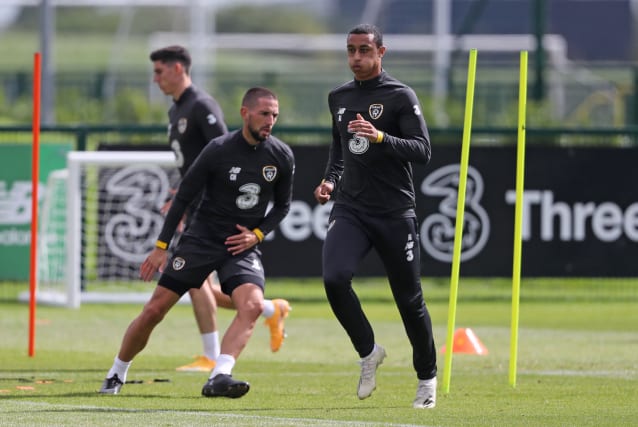 John Egan is delighted he did not give away all his secrets when he bumped into Adam Idah as a schoolboy.

The 27-year-old presented fellow Corkman Idah with a Player of the Year award when he was 13, a fact of which he was reminded when the now 19-year-old striker posted a photograph of their meeting after they had played against each other last season.

Sheffield United defender Egan briefly marked the Norwich striker – who had come on as a late substitute – in a 1-0 win for the Blades at Bramall Lane on March 7 and was glad he had not dished out any tips six years earlier.

He said with a smile: “I didn’t, thank God, because now if I’m marking him, he’ll know what to do.

“He’s a good lad. I’ve known Adam a few years now. He’s from Cork and back in the day, he was scoring a lot of goals for Corinthians.

“I presented him with an award when he was about 13 and he was the same size as me, so he’s a big unit.

The pair enjoyed a reunion last week when Idah was handed his first senior call-up for the Republic of Ireland, and both were named in the starting line-up for Thursday night’s Nations League opener in Bulgaria as new manager Stephen Kenny threw the teenager straight in at the deep end.

“He’s a really good prospect. Hopefully he’ll keep the head down now, keep improving and hopefully see where it takes him.

“He’s a really good player and his hard work starts now. It’s up to him to build on this and keep impressing in a green shirt and at his club.”

Egan has done just that himself to establish himself as a key member of both his club and international sides, although even as one of the older members of the starting XI in Sofia, he is taking nothing for granted ahead of Sunday’s clash with Finland.

“I’m still only 27 myself, so I’m not too old yet. I haven’t played a lot of games, but I’ve been in a lot of squads, so it’s up to me now to try to get in the team, stay in the team and perform well for Ireland.”