Gareth Southgate feels England ‘got out of jail’ in Iceland 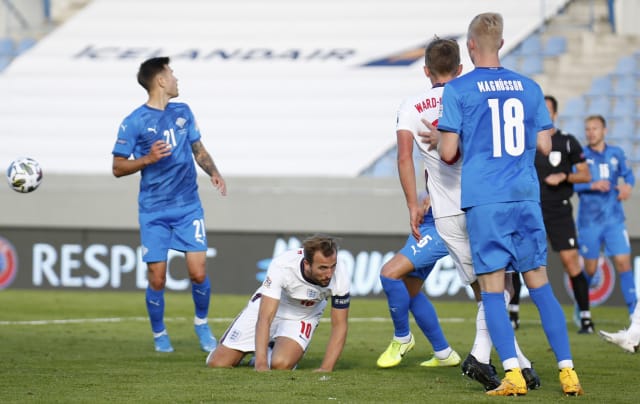 Gareth Southgate was left feeling like England “got out of jail” after Raheem Sterling’s spot-kick secured a last-gasp victory as an otherwise drab Nations League clash in Iceland came to a dramatic conclusion.

Having waited 10 months to resume action due to the coronavirus pandemic, the rusty Three Lions were unable to return with a bang against the well-drilled hosts in Reykjavik.

Harry Kane’s wrongly disallowed early goal and Kyle Walker’s 70th-minute sending off for a second bookable offence made life difficult against Iceland, yet England managed to snatch a 1-0 win at the death.

But England almost blew victory moments later, with Joe Gomez breathing a sigh of relief after seeing Birkir Bjarnason blaze over the penalty he had had given away in stoppage time.

“It was a very strange game, really,” Southgate said. “I thought for 20 minutes we were actually quite sharp.

“We were obviously always in control of possession of the game, and we had this challenge of breaking down a packed defence.

“Obviously the goal that is disallowed would have had a big bearing on the flow of everything, so that’s a factor that we have to consider.

“I thought we showed the right levels of patience and of course the red card has a huge bearing then on what’s possible.

“First time we’ve had that since I’ve been a manager and we’ve always stressed how difficult it is to win games from those positions.

“But we actually showed terrific character and on the field good organisation.

“We still wanted to keep a threat with the three forwards and I think if we’d scored the late penalty and that had been the end of it we’d have been talking about a performance of great character and we got through it.

“Of course, we then give a really poor penalty away and it feels like we’ve got out of jail, so mixed emotions.

“You know, really pleased with the players that they got the win, two big lessons to learn from, in particular, and the rest is kind of understandable given the point of the season that we’re at and what we’ve had to ask the players to do.”

Southgate underlined that lack of match fitness when the topic of England’s blunt attack was broached, although even he seemed surprised at the drop in sharpness during the game.

“I like the character to respond to the setbacks that we had up until the 93rd minute,” the Three Lions boss said. “I think our approach to the game was right.

“I had seen in training a different level of sharpness, but actually it’s only when you get into those match situations that the lack of playing time and the lack of training time for so many of the players – and it really has been minimal for a lot of them – inevitably starts to show.

“When you’re trying to break down a packed defence, that is a really key aspect to being able to do that.

“So, the obvious lessons are the red card. You know, you can’t make challenges like that. I know Kyle has sort of spoken about it and he’s held his hand up in the dressing room.

“It makes life so difficult to win games, down to 10, so to win with 10 is actually, you know, I think commendable for the attitude of the players when we ended up in that situation.

“And then to invite the pressure once we’d scored in the way that we did was another lesson we have to learn.

“We hadn’t really been in trouble up to that point bar the odd counter-attack and the odd set play, and it’s a really basic penalty that we’ve given away so that took a bit of gloss off of the win.

“But it was an important win. We knew this would be a very tough game given all the circumstances that have surrounded it for both teams and we have to move on now and assess who can go again on Tuesday.”

“I’ve been a coach over 40 years and this feels like one of the worst defeats,” he said.

“We didn’t create so much in offence, but I have to say, they didn’t either.”