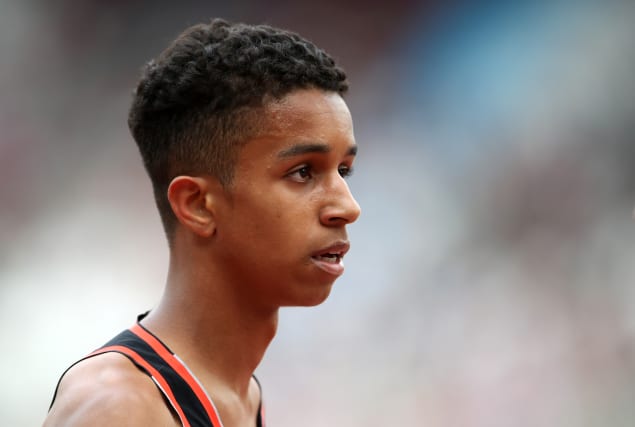 Daniel Rowden is confident he can contend for an Olympic medal next year after he got the better of Jake Wightman to claim 800 metres gold at the Muller British Athletics Championships.

Wightman led on the last bend at Manchester Regional Arena before Rowden overtook and surged to victory, clocking a time of one minute 45.94 seconds.

As in other events at the meeting, there were notable absentees. Elliot Giles, Kyle Langford and Guy Learmonth did not feature after competing in Marseille on Thursday.

Rowden said: “As soon as I kicked I felt it was coming. I knew I had a little bit more left to give if I really needed it and to pip him at the end was great.

“It’s huge – especially with it being a year with no major championships, the British Championships is the top competition to be at. I’m not sure why not everyone is here.”

Prior to the rescheduling caused by the coronavirus pandemic, the meet in Manchester had been set to take place in June and double as Olympic trials.

Asked if he was disappointed some of his rivals had not come, Rowden said: “A little bit, but I know we’ll be able to race next year.

“Important as this has been, next year’s British Champs is a whole other level, in terms of Olympic qualification.”

And regarding the Tokyo Games, he said: “The trickiest part will be getting to the finals, but once I’m there, I believe I’ve got the tools to be able to do some damage and push for the medals, definitely.”

Eighteen-year-old Keely Hodgkinson was champion in the women’s race, finishing in 2:03.24.

Holly Bradshaw retained her pole vault crown after clearing 4.35m, and revealed afterwards that it had been an emotional time for her.

“I’ve had a really rough 24 hours,” Bradshaw told the BBC.

“My grandad passed away yesterday. He was one of my biggest fans. I really felt like it was appropriate to come and try my best. I’m glad I came and still got British champion. He would be really happy.”

Morgan Lake also made a successful title defence as she won the high jump.

Hannah Williams won the 200m in 23.83 seconds, claiming the title her sister Jodie had won the previous year. The heats had seen Kristal Awuah, 100m silver medallist on Friday night, disqualified, along with Kaliyah Young.

The men’s champion was Andrew Morgan-Harrison, triumphing in 20.69 despite an apparent injury issue.

In the 1500m races, Laura Weightman won the women’s title and George Mills – son of former England defender Danny Mills – the men’s, and Laviai Nielsen and Alex Knibbs were the winners over 400m. Jessie Knight claimed the women’s 400m hurdles gold, with Alastair Chalmers doing so in the men’s race.

This year’s British Championships featured para events for the first time, and there were victories on Saturday for Brent Lakatos (400m wheelchair) and Zach Shaw (100m ambulant).