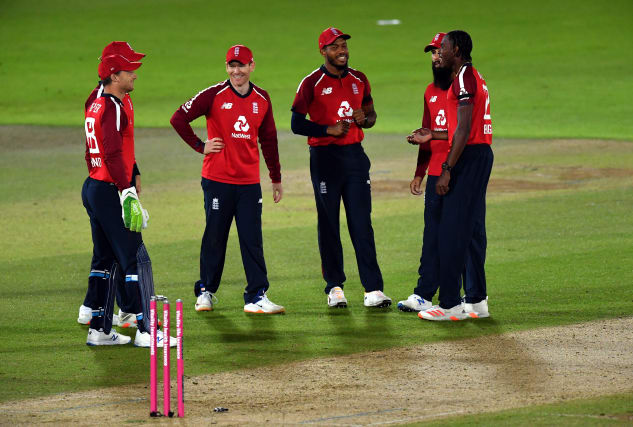 Chris Jordan is looking forward to playing more with Jofra Archer after the seamers starred for England in Friday’s Twenty20 series opener against Australia.

It was only the second time the pair, who were both born in Barbados, had featured together on the international scene and they inspired a two-run victory for Eoin Morgan’s side.

Before the game, Archer presented Jordan with a cap to mark his 50th T20I appearance and said a few words about his fellow fast bowler.

It saw the roles reversed because last summer Jordan was asked to do a presentation when Archer became England’s 693rd Test player at the start of the Ashes series.

At the Ageas Bowl the Sussex team-mates delivered when it mattered most and they are eager to play together more ahead of next year’s World Cup in India.

“The first was his T20 debut in Cardiff (against Pakistan in 2019) and this was the second, so hopefully plenty more to come,” Jordan said.

“My 50th cap sneaked up on me. Phil Neale, the manager, rang me and reminded me and it really hit me.

“Jofra said some very kind words, he just talked about how I am around the group, what I bring to the table and how I encouraged him to do as well.

“It was quite short but very spot on and one of those things that will last in my memory. Nice of him to return the favour.”

Since the duo first met in the Caribbean almost a decade ago, they have become close friends and when Jordan gave Archer his Test cap last summer he revealed it was one of the proudest moments of his career.

It has been a rollercoaster ride for 25-year-old Archer since his debuted for England last May, helping clinch World Cup glory before he impressed in the Ashes, but he was racially abused in New Zealand at the end of 2019 and again this summer.

The second incident occurred after the fast bowler was withdrawn from the squad to face West Indies in the second Test when he breached bio-secure protocols with an unauthorised visit to his flat in Hove.

It was a low moment for Archer, but he had a smile back on his face against Australia on his way to figures of two for 33.

Jordan added: “One of the things I told him when I gave him his cap was that at the minute he was on a high but he will experience some low periods.

“But because of the character he has, he will always find a way of coming through it. The biggest thing for me last night was the amount of times Jofra was smiling.

“He really looked like he was enjoying himself out there. I started to tease him when he touched 92mph whether he could touch 95.

“All the bowlers were having a really good time out there, it was nice to be at mid-off and watch him execute his skills and do his thing.”

It took an excellent comeback in the field for England to triumph with Australia going from 124 for one to 133 for five in 14 balls.

The penultimate over of the innings, bowled by Jordan, went for four and it enabled Tom Curran to defend 15 and put Morgan’s men 1-0 up ahead of Sunday’s second meeting in the three-match series.

Earlier Jos Buttler’s 44 in rapid time got England off to a bright start, but a collapse of their own put them in trouble before Dawid Malan hit 66 to lift them up to 162 for seven.

“Over the last few years especially a lot of the talk is about the batting line-up and how phenomenal it is, but it was nice last night that the bowlers in a sense bailed the batters out,” Jordan admitted.

“TC’s final over was brilliant. He held his nerve and stayed as calm as possible in the situation and executed the plans which was the most important thing.”