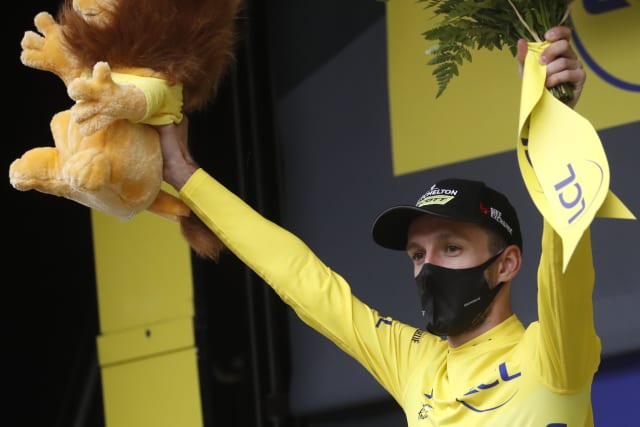 Adam Yates held off a string of attacks to retain the yellow jersey as the Tour de France moved into the Pyrenees on Saturday.

The Bury rider was attacked repeatedly by his rivals on the Col de Peyresourde, the final climb of a testing 141km stage from Cazeres-sur-Garonne to Loudenvielle, but kept his cool and was able to get back on their wheels on the descent to the finish.

It means the Mitchelton-Scott man retains a three-second advantage over Jumbo-Visma’s Primoz Roglic before another day in the mountains on Sunday.

“In the end I did my thing and tried to stay with the best guys, and here we are,” said Yates.

“Right at the bottom of the last climb (Tom) Dumoulin set a ferocious pace and I couldn’t hold the wheel. I had to ride at my own pace for a little bit, collect myself, but I pulled my way back and over the top I managed to stay with the guys so all in all it was a good day.”

AG2R La Mondiale’s Nans Peters took his first career Tour stage win out of a 13-man breakaway that went up the road early, and a victory for the French fans was much needed on a day when their main contenders in the overall battle suffered a bad day.

Thibaut Pinot has shouldered most of the hopes that a 35-year wait for a home winner might soon end but his Tour ambitions were left in ruins by the end of the stage.

The Groupama-FDJ rider, still carrying a back injury from an opening stage crash in Nice, cracked on the first hors categorie climb of the Tour.

The peloton was barely on to the Port de Bales – where Pinot impressively took control of the young riders’ white jersey in the 2014 Tour – when the 30-year-old was dropped, appearing in obvious pain as he was surrounded by his team-mates.

When one of them slipped a consoling arm around his shoulder it signalled his Tour challenge was over before the first rest day.

As the race then moved on to the Peyresourde, Julian Alaphilippe put in an early dig but it proved a short-lived and ill-advised move as the Deceuninck-QuickStep man was soon caught and spat out the back, tumbling out of contention.

Instead Roglic would be the one to pile pressure on to Yates. Three times he was part of groups that distanced Yates, and when he went clear over the summit it seemed inevitable that his aggressive descending style would bring him time gains.

But Yates held firm, easing his way back on, and when Peters’ team-mate Romain Bardet tried a late dig it was the Brit who moved first to chase him down.

One rider who did get away was Tadej Pogacar, the UAE Team Emirates man clawing back some of the 81 seconds that he lost in crosswinds on Friday.

Yates’ resistance thwarted the ambitions of Jumbo-Visma, who saw Dumoulin slip more than two minutes down as for once they did not get things their own way.

Before the Tour Yates was adamant he would target stages, not yellow, after an illness hampered his preparation.

Saturday’s performance illustrated how hard he will fight to keep the jersey now he has it, but he remains unsure how long that can last.

“I just want to take it day by day,” he said. “It’s not every day you lead the Tour de France so I’m not going to throw it away, I want to keep it as long possible.

“If that day comes then I will lose a lot more time than I usually do and start targeting some stages.”

While Yates basked in yellow, Pinot would eventually roll over the line some 18 minutes after the main contenders, yet another Tour ruined by ill fortune.

“Maybe it’s a turning point in my career,” he said.