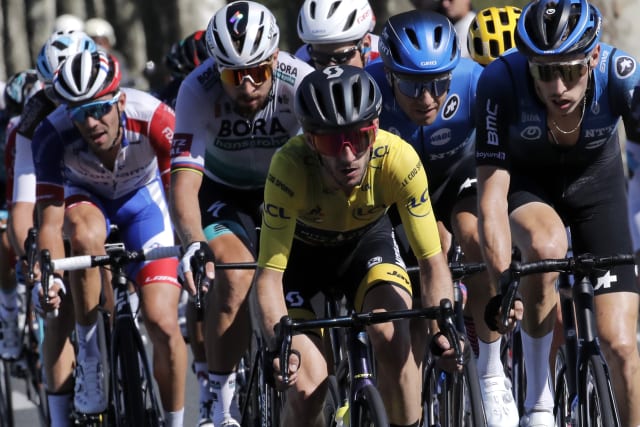 Wout Van Aert won an explosive stage seven of the Tour de France to Lavaur as Adam Yates hung on to the yellow jersey amid powerful crosswinds that would cost others dearly.

On what was supposed to be a relatively benign day before a weekend in the Pyrenees, Jumbo-Visma’s Van Aert collected his second stage win of the Tour as the winds ripped through the peloton to cost the likes of Tadej Pogacar, Mikel Landa, Richie Porte and Richard Carapaz 81 seconds.

The 168km stage was raced at a ferocious pace as Peter Sagan’s Bora-Hansgrohe team put the hammer down as soon as they left Millau, dropping the sprinters to enable the former world champion to seize the points leader’s green jersey back from Irishman Sam Bennett.

And there was no let-up as the reduced peloton was split in three late on, though Yates remained attentive near the front throughout and got himself into the front group as the race ripped apart as they left Castres.

“Everyone was expecting to have an easier day before two big mountain stages, but Bora obviously had other ideas and we rode pretty much full gas from start to finish,” the Mitchelton-Scott rider said.

“It was a hard day for everybody, and now it’s straight into the mountains so let’s see what happens.”

Van Aert’s assignment was to look after team-mates Primoz Roglic and Tom Dumoulin, with Roglic only three seconds off Yates in second place, but when he found himself near the front in the final metres he was able to overhaul Edvald Boasson Hagen and follow up his stage-five victory.

“I’m really proud of it,” Van Aert said. “It was straight from the gun really hard. It was a very impressive stage from Bora-Hansgrohe, they were flat out from the first kilometre and made sure a lot of the sprinters were dropped.

“It was always hectic because everyone feared the crosswinds. At the end we saw it was worth it to put a lot of energy into the positioning. I was with Primoz the whole day in the front so it was a good day for the team.

“A lot of the GC favourites lost time and I could finish it off as well.”

The Ineos Grenadiers did much of the work to split the group in the winds, with defending Tour champion Egan Bernal well placed, but Carapaz dropped out of the front group after suffering an ill-timed puncture.

Bernal was the first of the GC contenders to cross the line and, with Pogacar distanced, took over the white jersey as the best young rider.

“In the finale, we’ve seen the opportunity and we took advantage of it to split the bunch,” the Colombian said.

“I think it’s something good: the Tour de France is also won in stages like this one, you have to use all terrains. My team did a perfect job.”

Sagan once again took control of the points classification he has won in seven of the past eight Tours, with Bora’s work to split the group allowing him to pick up 17 points in the intermediate sprint won by CCC’s Matteo Trentin.

Bennett finished a tough day empty handed, part of a group that finished more than 10 minutes down on the road.

“I’m just disappointed with myself, I feel I let the team down,” the Deceuninck-QuickStep rider said.

“I was told to switch focus and look at trying to win the stage, so I didn’t look at Bora at the start, and that was a bit of a mistake.”

Sagan was able to turn a 12-point deficit into a nine-point advantage in the category, and Bennett said he was unsure if he would try to get the jersey back or focus purely on what trying to get would be a maiden Tour stage win.

“There’s a lot of energy that goes into (chasing green), he said. “We’ll just have to see how it goes.”