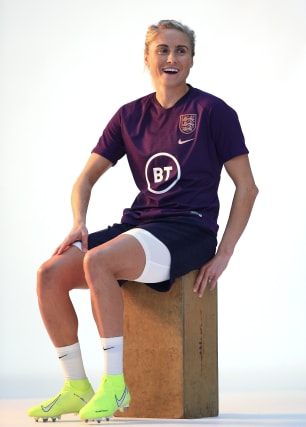 England Women’s captain Steph Houghton admits she “can’t wait” for the launch of the Women’s Super League on Saturday.

Houghton’s Manchester City side missed out on the title to Chelsea on a points-per-game basis after the league was called to a halt in May.

Now they are ready to kick off the new WSL season on Saturday against newly promoted Aston Villa and City skipper Houghton expects a difficult game.

“We’ve all been waiting for the season to start and to be able to play live on BT Sport for the first game, all the girls are excited about it,” Houghton said.

“We just can’t wait to get going. It’s been a long time coming since we played our last game in the WSL,” said Houghton. “It should be a tough test (against Villa).”

City will be under a new manager this year, after former Wales striker Gareth Taylor was appointed in May on a three-year deal, and Houghton believes he can improve the side.

“He’s quite quick to have a go at us if it’s not perfect,” she said. “But we need to be challenged.

“We need to be pushed on a daily basis because you want to be playing at the highest level, not just for your club but for your country as well.

“I’ve been really impressed with his standards, in terms of on and off the pitch, and what he really wants out of his training sessions and the details that he gives.”

Since the premature end to the women’s domestic season in February, City have brought in the likes of United States World Cup winners Sam Mewis and Rose Lavelle, and England player Georgia Stanway welcomed their arrival.

“I’ll definitely be watching what they do in training, what they do in recovery, just the little tips that you can pick up to improve my game, but it is unbelievable to have them as part of our squad.

“It’s so good to see how competitive the league is getting. We are investing, and we are willing to sign big players. It’s exciting to be a part of.”