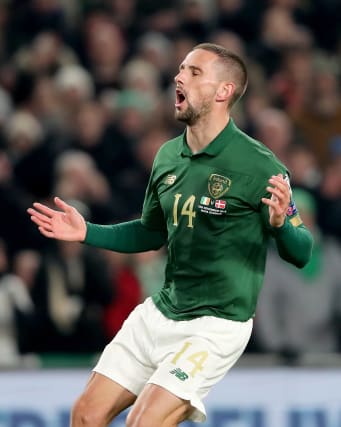 Conor Hourihane has insisted the Republic of Ireland will reserve the right to “win ugly” when needed despite adopting a new style of play.

Stephen Kenny’s first match as Ireland manager saw his team attempt to play on the front foot as he looked to add a more progressive approach to the passion, organisation and resilience which have served them so well in the recent past.

In the event, they emerged with a 1-1 Nations League draw with Bulgaria in Sofia courtesy of a towering Shane Duffy header which came straight out of the set-piece playbook and in the nick of time.

Asked if there was added pressure on Kenny’s Ireland to play with greater flair while still needing results, Hourihane said: “Listen, we’re in a results business. We all want to win and we all want to get good results first and foremost.

“You simply have to win and win ugly at times – that would be absolutely fine as well. But if we can win and play well at the same time, that’s the thing everyone strives for.

“The opposition will be trying to win as well. If it was an easy game, we’d all be winning and we’d all be playing great every single week.

“We just try to take the manager’s ideas on board as much as possible. He’s given us a lot of info to try to take on board over the last three or four days.

“Listen, we want to play well, we want to win, of course, and that’s what everyone’s after.”

The draw in Bulgaria was perhaps less than Ireland had been hoping for, but it at least gave them a platform to take into Sunday’s home clash with Finland and beyond it, next month’s rescheduled Euro 2020 play-off in Slovakia.

Kenny and coaches Damien Duff and Keith Andrews had only a few days to drill a new philosophy into their players before boarding the plane for Sofia, but there were encouraging signs for those both on and off the pitch.

Aston Villa midfielder Hourihane, who lined up behind a youthful front three of Callum O’Dowda, Aaron Connolly and 19-year-old Adam Idah, said: “It’s been a change in direction and style, there’s a new freshness with the young lads coming in.

“It’s a new style, new era, new playing style by the looks of the other night, which is great, so it’s a very exciting time.

“I’m sure over the coming months there’ll be improvements and we’ll get better, but hopefully now heading into Sunday we’ll get a little bit more info and a few more ideas from the manager and hopefully get another good performance.”